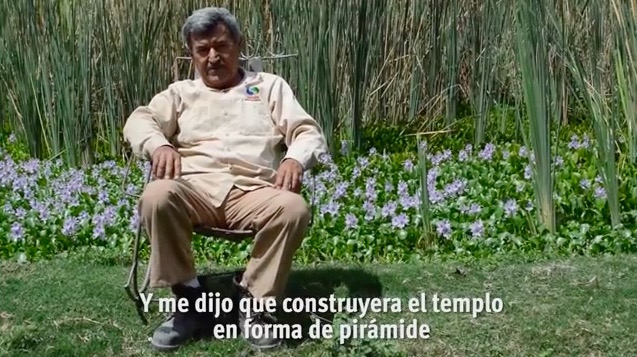 Raymundo Corona built a stone pyramid on his farm near the Mexico-U.S. border on orders from a tall alien from the Constellation Orion named Herulayka, who had honey-colored eyes and white hair, like many Orionians, except for those other Orionians with honey-colored hair and white eyes, not that there’s anything wrong with that.

Corona, 33 when he claims the alien visited him in 1984, said: “He told me to build the temple in the form of a pyramid.

“When I asked him why it had to be in the form of a pyramid, he said it was because it should be like my faith, something that winds and storms couldn’t move and was always pointing upwards.”

Recalling the moment he asked his mysterious visitor his name, Mr Corona told Mexican daily La Vanguardia that Herulayka had warned him: “Many people will laugh at you, defame you and say it was an act of insanity or something he did during a bender, it was an act of a madman or a drug addict.

He said the extraterrestrial had claimed humans were destroying their own planet and should wake up to the fact they must look after it like a child because it gave them what they needed for their own survival.