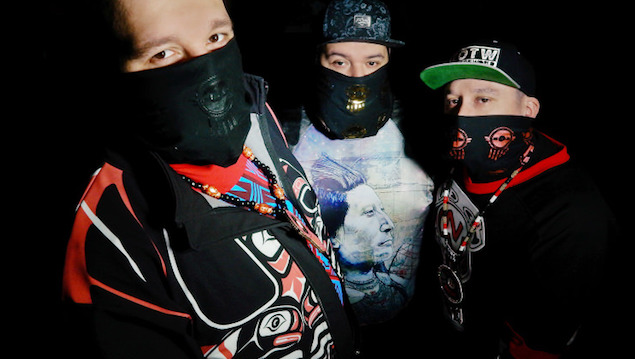 There’s no experience more thrilling than hearing A Tribe Called Red’s ingenious blend of traditional and synthetic sounds blaring through top-shelf speakers. And with every stomp-stomp-clap on their new track, “Stadium Pow Wow,” the Canadian First Nations DJ crew — featuring new member 2oolman, and with the help of Manawan, Quebec drum group Black Bear — makes a bid for being on arena jockey playlists across North America.

It would be a fitting sonic reclamation of space, given Deejay NDN’s advocacy to end the use of racist caricatures and mascots in sports culture.

Tribe explained the significance of the track to The FADER, via email…

This song represents a new era for A Tribe Called Red. It’s not the first song that we have released with 2oolman or Black Bear, but it feels very special to us because it was one of the first songs we worked on with 2oolman and also the first time we worked closely with a drum group. Doing that was the realization of a dream that the band has had for years, and we are super thankful to Black Bear for being open minded about it.