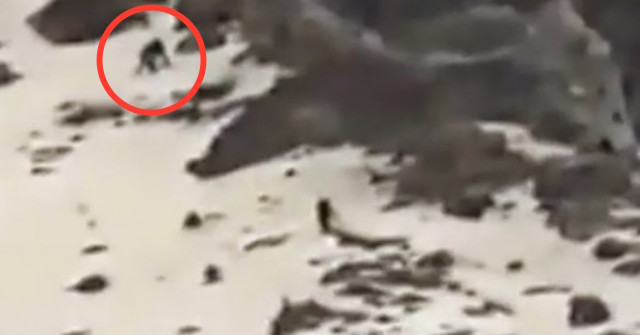 Popocatepetl is located in the states of Mexico, Puebla and Morelos in Central Mexico. At 5,426 meters (17,802 feet), it is the second highest peak in Mexico. UFOs have been reported frequently in the area, with some witnesses seeing them entering or leaving the mouth of the volcano.

In a recent interview on Tercermilenio television, climber Guillermo Vidales, also known as Huracán Vidales, said that mountain rescue crews on Popocatepetl saw humanoid creatures measuring about 2.5 meters (8.2 feet) in height at an altitude of over 4,000 meters (13,000 feet). Seen on more than one occasion, the beings appeared to be thin and brown and not wearing any visible clothing. They showed amazing speed and skill, according to Vidales.

Once, we saw one of these individuals climb up the glacier in 10 minutes, a stretch that we linger about 3-4 hours to go. They have an amazing agility.

In addition to the photographs, Vidales says the teams have found footprints that don’t resemble humans.

His footprints are very large, the part corresponding to heel leaves a hole, something that resembles a claw which apparently serves them – like a propulsive support – in these dislocations impressive through the snow and ice.

listen to ‘How to say Popocatepetl’ on audioBoom