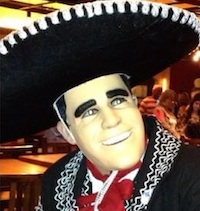 @MexicanMitt Romney phoned public radio station KUNM in New Mexico Monday night for his first post-election interview. The Twitter Idol liberally assigned blame for his defeat by Bronco Bama, reminisced about the fireworks he planned to set off had he juan and revealed he’s still on the lookout for his missing running mate Pollo Ryan. Here’s the interview from the program RAICES.