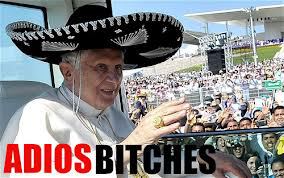 And the numero uno reason Pope Benedict is really resigning is…