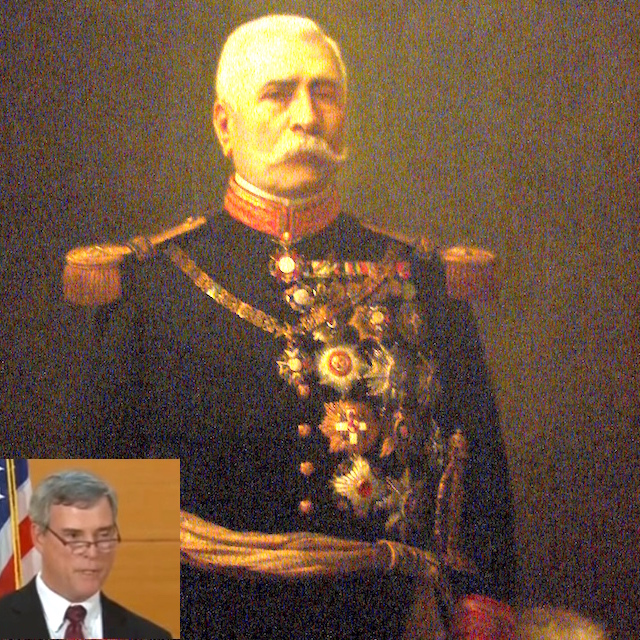 The spirit of Diaz, known to wander the earth after he was denied burial in his homeland, returned to the physical realm on Día de los Muertos, and has maintained a busy schedule since his return.

“I was conflicted about how to handle this case,” McCulloch said.

“After a late night reviewing the evidence, I was wrestling with my recommendation of whether to prosecute Officer Wilson, when I dozed off. I awoke with this strange sensation that I was not alone, and I recall smelling a sweet spicy scent that seemed to be emanating from the dark corner of my home office. That’s when I turned and saw him, a glowing white apparition wearing an old-fashioned army uniform with lots of medals, a sash and epaulets.”

The apparition, he said, introduced himself as “Don Porfirio Diaz Mori, at your service”, and offered him a plate of turkey in mole, the source of the rich aroma.

“Don Porfirio asked me what had been troubling me, and I told him about the Michael Brown case, and how I had been tasked with trying to address the outrage over his killing by a police officer, and the whole time he looked at me with what I can only guess was a smile under that enormous white mustache,” McCulloch recounted.

“After I finished, he reached out a white-gloved hand and touched me on the shoulder. ‘Do not trouble yourself,’ he said, ‘with these law breakers who attempt to disturb the order and progress of this great County of San Luís, you must tell the members of this gran jurado that your officer was merely following the “ley de fuga”, and that this bandido Brown was shot while trying to escape from justice.'”

“The ghost told me that the ley de fuga could be used to solve all of my office’s problems with these unruly savages that were bound to be eliminated by the forces of evolution as a weaker sub-human species to which no rights of man should apply.” McColluch recalled.

“I had never been exposed to such brilliant legal and scientific reasoning, and after 30 minutes with Don Pofirio, everything that I knew to be right about the world was confirmed,” McColluch said. “And the ley says if a guy is running away, you can shoot him! Perfect!”

“Before I met him, I didn’t know much about el presidente, but he told me that he had been elected president of Mexico like seven times, and I totally believe it because the man is very charismatic and sharp as a tack and a sharp dresser.”

McColluch asked if Don Porfirio would like to remain on his staff as a “spirit advisor,” but Don Porfirio declined.

“He said that he mostly did consultant work these days because his services were in high demand. He said that he was needed in Mexico that next week, because there were some other thugs and troublemakers who were demanding justice for the justified executions of other miserable degenerates in Ayotzinapa, Guerrero who defied authority and didn’t know their place,” McColluch said.

As his spirit dissipated in a breeze that blew him out the window, McColluch remembers the ghost’s parting words:

Wherever there is need for the strong hand of a father to discipline his children, you will find me….

In other spirit news, the ghost of the arm of Alvaro Obregon was suspected of delivering thousands of votes in favor of the GOP in the recent mid-term elections, but has so far evaded arrest.