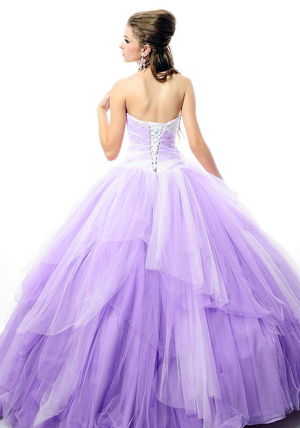 Ann selected a “joyful, lilac strapless A-line gown (photo, above), with a sweetheart neckline, and a lace-up back,” Gallegos said. “With that dress and her diamond tiara, I’m sure we will get more donations for the campaign!”

Danny Duran, owner of the Querétaro Meats chain and the padrino of the DJ, is excited: “Romney will be the first Mexican-American president, and I want to be part of it.”

The Romney campaign confirmed that the former Massachusetts governor will be at the event (set for the Convention Center) as Ann’s chambelán and said the couple been taking waltz lessons. Also preparing for the dance highlight of the evening, is Rafalca, Ann’s dressage horse, who has been honing her waltzing skills for the big event. Rafalca will also wow the crowd with her quebradita, lambada and freak moves.

The “after party” includes a ride in the extravagant Rómnibus, which sports a disco ball and a cappuccino maker. Party-goers will be dropped off at their respective countries of origin.

Romney is blatantly against the Dream Act. Why would Latinos or so-called ‘Hispanics’ support him?

Saenz said other members of the Echo Park Democrats Club would be “jeering at attendees” when they start arriving.

But Neita Ramírez, owner of Yes We Can hair salons in the San Gabriel Valley, and the madrina of la cerveza, is pumped. “Estoy bien excited to have my picture taken with the Romney. Es muy guapo!” she said.

Tickets are still available, including one sponsorship: Madrina/Padrino del Limo.