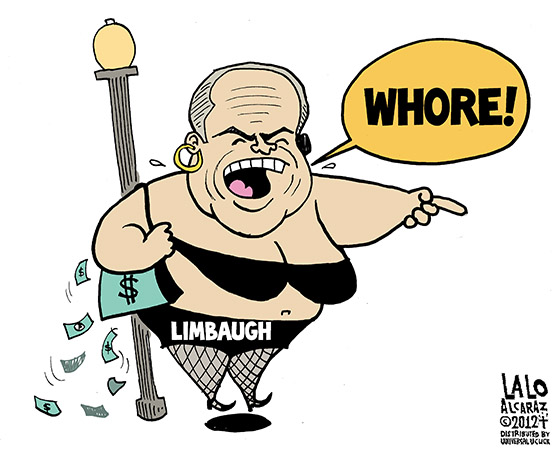 Bloated drug addict and political hate merchant Rush Limbaugh has been losing advertisers on his hateful radio show since he called 30-year-old Georgetown University law student Sandra Fluke a “slut” and a “prostitute.” She merited this libelous statement apparently because she would dare to stand up for women’s health concerns and also use contraceptives. Yes, birth control.

What if Fluke had replied that Limbaugh was suspected of abusing both Viagra and young underaged sex slave children in the Dominican Republic? Well, that would have been an awful, awful thing to say.

Above is my view of Limbaugh and the sweet irony that a sleaze who prostitutes himself out to the oligarchs and plutocrats of the U.S. would make accusations against anybody who works decently for a living.