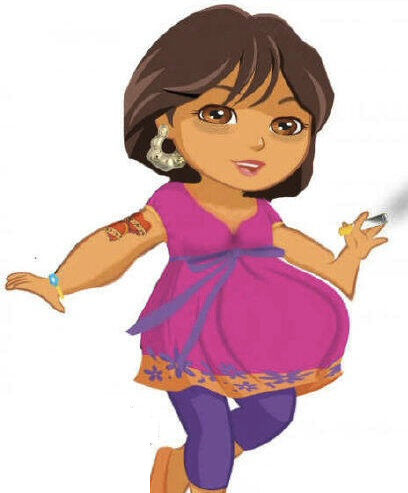 I’ve got a problem with Dora the Explorer. I know you do too.

What the hell is the matter with television’s longest running bilingual toon whore?

This passive-aggressive little cow yells too much.

She asks a question, then waits silently for the answer while staring at you like a creep. I swear she can see me through the TV screen!

This unemployed bitch has been on air for almost 13 years now and she hasn’t figured out why her backpack is on acid and why her pet monkey stole her boots.

If she is so fucking smart why is she always asking the damn kids questions like, “Do you see the elephants?” Well no shit, dumbass. They’re big-ass elephants! I seriously think the producers let Boots write the show after he downs a bottle of Jack.

[Editor’s Note: This was a monster post when we published it on this date last year, so we thought we’d run it again for pochos who missed it the first time around.]

Oh and good grief what’s up with the theme music? Someone shove a marimba up the butt of whoever composed that damn intro. Duh duh duh duh duh Dora. Wow. Creative. Put some maracas in there too. And claves.

I have probably gained more knowledge reading the back of a Lucky Charms cereal box than from watching 30 minutes of this fidget asking repetitive questions.

I also wonder why in a country where child obesity is a big problem, why in fat Jesus’ name did they make Dora a little overweight? Has she been stocking up on all those Pan BIMBO products? Or are bellyshirts the pre-pube style now?

And apparently she can’t match her clothes either — a pink shirt, orange shorts and yellow socks!? This bitch is colorblind, or from Spanish Harlem.

Where the hell are her parents? I’ll tell you if I was roaming around like that at that age my parents would have been walking around packing el cinturon, chanclas and a .22!

How many times do why have to hear “Where’s the map? What’s a map?” If your child does not know what a map is by age five, enroll that child in a beauty contest with Honey Fucking Boo Boo.

Oh and to top it off, because Dora wasn’t dumb enough they decided to give her stupid cousin a show too. Diego! Fuck him too, twice as stupid. Someone should call Cartoon Child Protective Services and put these two in a home. Get thee to a toonery!