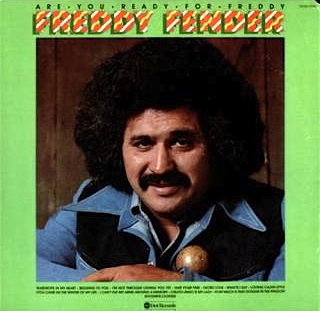 Fender wore his “Freddy’s Fro” during most of his career. Because the hairstyle “become so iconic during the When the Next Teardrop Falls era of the 70s, Freddy without his ‘fro’ was not Freddy at all to the public,” according to Committee historian Belinda Huerta.

“It was his headdress while doing his ritual of canto,” Huerta said. “He cut his hair and had a guy in Reynosa make into a wig during the Teardrop days.” His real hair style, according to Huerta, was “short and trim” and wore the wig “for performances and public appearances” and later started dying it to show “canas” as he aged.

“When I saw the Freddy’s Fro on the Freddy mannequin, I knew it was the real deal,” Gamboa told PNS.

“I saw Freddy’s Fro many times on the Johnny Canales Show on KRGV,” Gamboa explained.

Museum spokesman Mick Ronson is adamant. “The wig was obtained legally through a private seller and is an essential part of our exhibit.” Noting the Museum hasn’t returned the “pinche Elgin Marbles to Greece,” Ronson says the Texans’ efforts will be wasted days and wasted nights.”

“If the wig is not returned before the last teardrop falls we lose part of our historia, our cultura and it will continue making us blue,” Huerta countered.