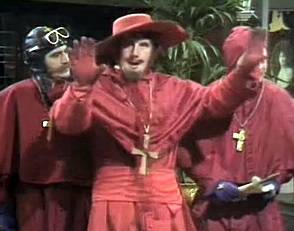 It’s rough being a Chicano, one little misstep and you can crap all over the sanctity of your Chicanismo. Here’s a list of the top eight Chicano sins you want to avoid, just in case you have trouble keeping track.

8. Changing your name to an Aztec name: If you’re Rosa, don’t pretend like you’re really Xochitl just because you joined MEChA. And that goes for you, too, Nezahualcoyotl, I mean Erick.

7. Confusing Emiliano Zapata with Pancho Villa: Yes, they both had mustaches, but not all Mexicans look the same. One of them was a revolutionary or something, right?

6. Talking shit about RATM: Every Chicano loves Rage Against The Machine, without question, everyone knows this. How dare you?!

5. Pointing out you’re dating a white girl: Dude, viejas are viejas, hands off! Just because Samantha isn’t brown on the outside, doesn’t mean she’s not down with the brown on the inside.

4. Forgetting about your community: Look, who cares if you moved out of the barrio the first chance you got? The point is you bring up your community at every opportunity — because you care too much.

3. Putting Tapatio on everything: We get it, you’re Chicano, OK? The “Hecho en México” tattoo gave you away.

2. Calling yourself “Spanish”: The truth is, you are not Spanish, that nopal on your forehead gives you away. You are Mexican, the Spaniards would not have you, and when you say shit like that, Chicanos won’t either.

And the numero uno Chicano sin…

Mispronouncing your own last name. Maybe stop trying so hard, dude, and just start with the basics, like who you are.