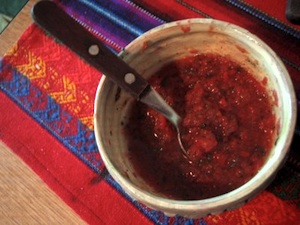 Today my son is in his room reading his Naruto muñequito books, so I can chare with you my special recipe for Valentime’s Day.

M’ijo don’t like it when I talk about sexy things because me and his daddy are divorce because his daddy like to stick his weenie ebrywhere.

[EDITOR’S NOTE: This article first ran in 2012 but it’s too good to leave in the archives, sad and alone, on Valentime’s Day.]