The other day mijo say he gwanted a burrito for breakfast.

“No,” mijo say. That is the burrito you make me gwhen I was little.”

“Ju know, a man that goes to gwork and he has a burrito wrapped in aluminio.” (That’s aluminum foil for ju pochos).

“But all ju do all day is go to eschool and play the games and read your munequito books.”

I dunno how to make a manly burrito so I have to invent it. I saw the estove where I had maked some breakfast and I got an idea.

Here is my receta (that’s recipe for you pochos) for mijo’s burrito:

Put some oil in a frying pan or eskillet. Heat the oil and put the onions to sweat gwith some salt. Then add the tomatoes and the chile. Leave it alone like mijo’s daddy leff me but instead of 10 jears, for like 10 minutes. The tomato should get soft and mushy like mijo’s daddy’s panza (that’s belly for ju pochos). Then add the eggs and gwhen they are cook, add the sheese.

I make the burrito for mijo and he say, “This needs somesing.”

He give it back to me like he is returning a t-shirt at the estore. I try not to roll my ojos (that’s eyes for ju pochos). 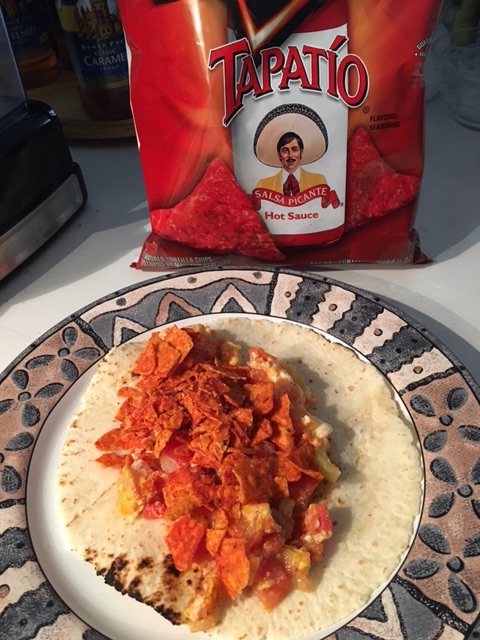 I think about this. I see some Tapatio flavor Doritos on the counter. Tia Lencha loves cronchy chips. Then, is like God, or the mariachi man on the bag of Doritos talk to me. I open mijo’s burrito careful, like gwhen mijo was a baby and he pooped his Pamper. I take some Doritos and mash them in my hand like I would like to mash mijo’s daddy’s heart. I sprinkle the Doritos inside the burrito and close it.

“This is a burrito a man could eat.”

I look at mijo. He eat his burrito. He get up and I say, “Gwhere ju going?”

“To shave my mustache,” he say.

I see no bigote (that’s mustache for ju pochos). I think he think he is like the man on the bag of Doritos.