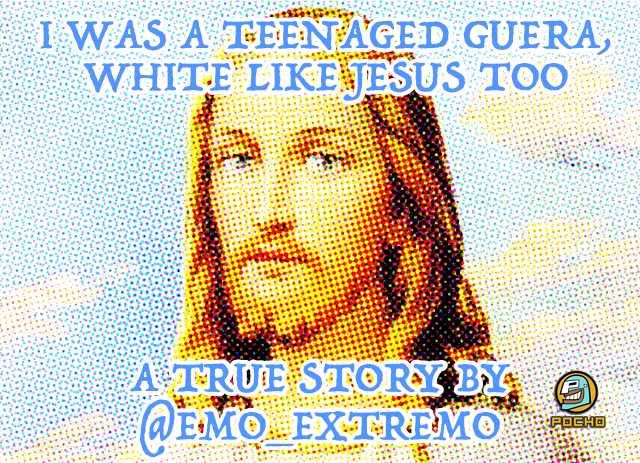 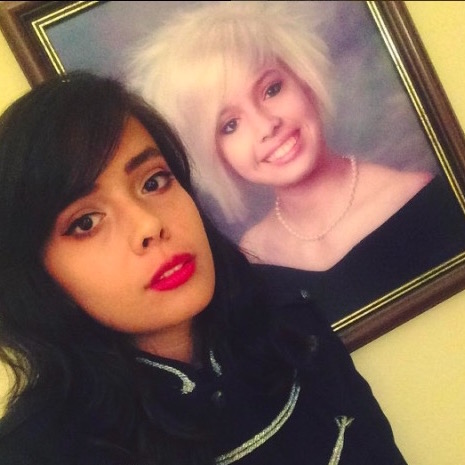 (Here I am now, in front of my senior photo from then.)

This whiteness thing didn’t register with me until a few years later, when I was in college and when I learned about “passing for white.”

I am in all definitions of the word, güera. Light-skinned, with straight dark brown hair, and aside from the washboard abs and facial hair, I look like I could be a distant relative of the Jesus statues in my old high school.

Past boyfriends’ abuelas would grumble how la gringra did not fix their grandson a plate because they did not think I knew Spanish.

Also, my last name is Presley.

This is good bad:

When I began to look into the Xicana movement, I loved what Xicanisma stood for and I was inspired by the countless diverse voices.

I wanted to be a part of it all, but I was apprehensive that my motives would be questioned due to my past ethnic ambiguity, and quite simply, that I was just “not Latina enough.” 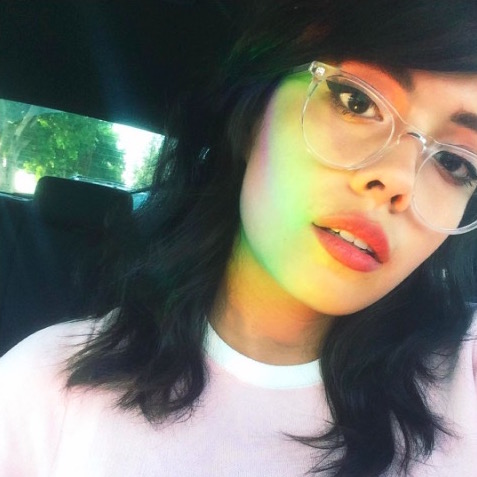 I wracked my brain trying to find my individual voice as a Xicana in something much larger than myself. After reaching out, I learned just how important introspection was when it came to claiming your culture.

Blacklotusrosie (see video, below), an active voice in the Los Angeles Xicana community, was one of the Xicanas I spoke with. We discussed the importance of educating yourself on the implications of “passing as white.”

Acknowledging privilege gets many people defensive. Many want to run from it, starting a new round of Oppression Olympics.

However, just like no one chooses their gender or to be a minority, privilege is ingrained. One must listen to the voices of the non-privileged; finding a “voice” is not as important as learning to listen better to others.

It took me 24 years to realize when to stop talking and let someone else have the floor.

Xicanisma has different meanings. The beauty of it is learning that everyone’s experiences are valid and acknowledging and embracing them.

I learned that the checklist of Latina requirements I was so concerned with was a product of Eurocentric beliefs and in actuality was distracting me from the real issues that my non-white passing Xicana sisters had to deal with on a daily basis.

I was hesitant to ask these questions and show my ignorance on this issue in a time where people are quick to call others out.

I will admit that I have my chismosa moments and I have enjoyed seeing someone get called out for something that they said.

However, in my discussions I learned the difference of “calling out” and “calling in.” Both seek to set ignorance straight, but “calling in” a person and discussing the problem uses the same amount of energy but adds a level of respect.

It is no one’s responsibility to teach me although I am thankful to those who have taken time out to share their knowledge.

I am a Xicana and it is something I will continue to work at, but do not take my silence as omission or indifference.

At first glance a search for my “place” in a feminist movement appeared counterproductive to what I thought the word meant, but I have found that listening to and acknowledging the voices of other Xicanas can be extremely empowering.