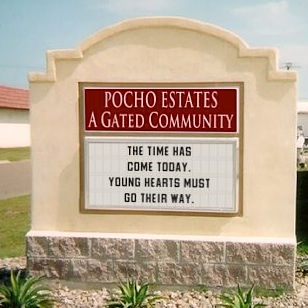 Rancho Pocho and surrounding communities will be alive with excitement tonight as everyone awaits the End of the World As We Know It at midnight local time. Don’t stay at home — party hardy or die Mayan!

Here’s what’s going on around town:

• FOR THE GENTS: In the Rancho Pocho Downtown Historic District, Club Rico for Gentlemen is offering no cover admission to a special presentation by the North Pole Dancers, the chillest elvettes to ever stuff a thong. Dressed as Santa? All lap dances are 50% off!  Prices good until midnight, of course.

• FOR THE LADIES: Don’t be fat at the end of the world — burn fat at the Grand Opening of the new Spin ‘N’ Thin Spa located where the Gun ‘N’ Run sporting goods store used to be on Miramar in Pocho Hills. Burn, baby, burn with “all you can spin” classes at two-for-one prices. Bring your BFF and spin till you barf at one low price. It’s never too spin to be thin! Special available until midnight.

• DINNER DELIGHTS: Pinky Pendejo‘s at the Top of the Olmos Building is offering pitchers of free Mayan Micheladas to parties of six or more. An exciting new creation by mixologist Tempus Fugazi, the Michelada burns with Mayan Muerte Mortal chiles. Fuzagi promises a second free pitcher to any table that can finish the first. And try the Fickle Fingers of Fajitas, served, like the Mayan Micheladas, only until midnight.

• FRIENDS OF BILL W: The usual Friday night meeting at First Congregational Church on Vendidoraigosa Way has been extended until midnight and welcomes special sponsor Happy Ending Donuts. Owner Tony Ngoy is donating all the donuts you can eat plus strong Cambodian coffee. Thanks, Tony! Say, do you know the Cambodian family that owns the donut shop in the Ritchie Valens Mall in Pacoima?

• TEACH-IN: The Mexican-American Students Association of Unincorporated East Los Angeles Community College has scheduled an all-night Teach-In, according to Hinojosa Cochalote, cadre leader for diciembre: “Look, the Mayans are getting ripped off, tu sabe? And we need to set the record straight. The Baktun will not be televised!” The Teach-In starts at 8 and runs until the end of the world in Room 204 of the Little Sleepy Memorial Building on campus.

• GOP WOMEN: The San Pocho County Republican Women’s Club‘s Annual Christmas Costume Ball gets a Mayan theme this year as Republican husbands dress as “migra” and accompany the gals dressed as housekeepers. Casino games, a shooting gallery and “pin the tail on the wetback” are among the scheduled festivities. Big band sounds from The Casa Rosa Orchestra and catering by Meester Molé. At the ballroom of the Gabacho Grand Hilton.  $250/couple.