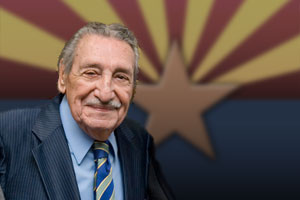 Castro, Arizona governor from 1975-1977, was being driven to a birthday lunch by a family friend when the pair were stopped on June 12. Castro was detained for a half hour on highway I-19 in Arizona in 97-degree heat. He repeatedly requested to be allowed to sit in his air-conditioned car rather than the outdoor tent (photo, left) equipped with  a fan to blow hot desert air and sand.

Since he informed agents his name was Raul Castro, officers had to check whether he was actually the new ruler of Cuba, and kid brother (photo, below) of brutal tracksuit-sporting semi-retired Communist dictator Fidel Castro. These brave agents may have stopped a reverse Bay of Pigs invasion of Cuban viejitos armed with tennis ball-tipped walkers.

Complying with the Show Me Your Radiation Levels law, Castro was forced to show why his car had set off radiation alarms. USBP agents might have suspected Castro was smuggling a “Dirty Mexican Bomb.” Agents did not report whether his car had the left turn signal on unnecessarily.

Amusingly, the only Latino ex-Governor of Arizona was born in Mexico.

Before the recent Supreme Court ruling against SB1070, the ex-governor and former ambassador to three countries Castro would have been required to carry his immigration papers, folded up and crumbly as they may be.

After being subjected to further radiation tests, it is not known whether carbon dating tests were also applied. Though Castro is the oldest living U.S. governor, after the 2011 death of Washington Gov. Albert Rosellini, 101, he is not the oldest-appearing governor.

That title remains with the Jurassic babe that is Arizona Gov. Jan Brewer.