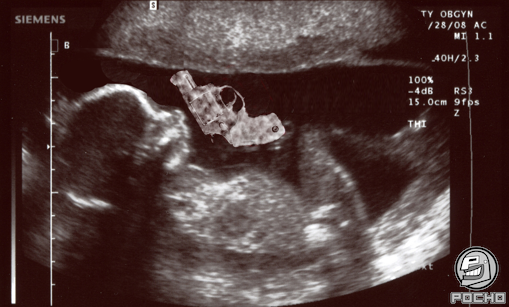 The law specifies that the guns will be inserted into the womb after a mandatory ultrasound.

“We’re not crazy,” Yee told PNS. “We won’t give the new person his constitutionally-protected tool for self-defense until he has hands and fingers to operate it with. That’s at eight weeks old, or as we like to pretend under Arizona law, ten weeks old.”

The bills’ backers have been quick to reassure concerned citizens that fetuses will not be allowed assault weapons—only the comparatively harmless handguns responsible for over 70% of firearms homicides.

Both Glock and Smith and Wesson have already begun manufacturing new miniature .38 Special handguns—available in both pink and blue—designed to be compatible with the Arizona initiative.

“It’s quite a tough problem,” explained a Glock spokesman. “Fetal limbs are of very limited strength. We had to make the trigger action extremely light, and obviously a fetus can’t operate a safety lock mechanism, so we had to leave that out.”

The guns will be factory tested, shipped in germ-proof plastic, pre-loaded with hollow point bullets, and fitted only by state-licensed medical professionals. “We’re not going to let just anyone push their pistol into a woman’s ladyparts,” Yee assured reporters.

“We’re setting up a special law enforcement group to oversee this,” Yee said. The Fetal Unborn Carry Department (FUCD) of the Arizona State Police will monitor every womb to make sure it is armed and dangerous. “If you get pregnant, we’ll make sure you get FUCD,” she said.

“The whole thing is crazy,” said pro-choice activist Hazel Earthchild. “I don’t want my baby growing up thinking that guns are a normal thing to own. Yes, they promise to make the guns out of surgical steel and titanium, but what about the bullets? Don’t they know that lead causes ADHD and autism?”

Rep. Trent Franks (R-Phoenix) applauded the proposed law as a measured and reasonable response to Arizona’s 8% abortion rate. “The point is to deter violence against the unborn child,” he said, “If it’s a legitimate abortion, we’ll make sure the fetus has a way to shut that down.”

Asked how the scheme would be funded, Franks explained that once the baby is born, its handgun will be confiscated and refurbished for use by another fetus, and the child will be billed a rental fee for nine months’ use of the weapon. The entire scheme is therefore expected to be revenue-neutral in the long term. “Once that baby’s out of the hoo-hah, he’s on his own,” explained Franks.

Opponents of the scheme have already promised legal challenges seeking to prevent its implementation, but whatever the outcome, it seems certain that the phrase ‘shooting beaver’ will soon take on a whole new meaning.