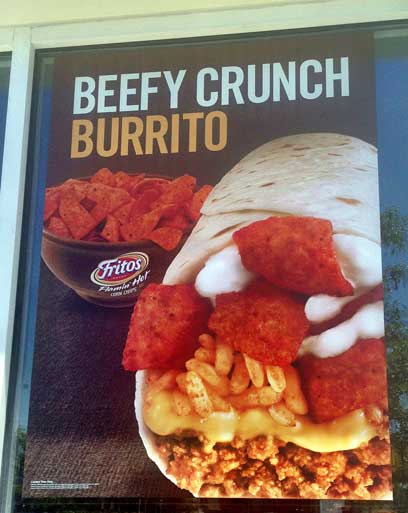 (PNS reporting from ALAMEDA) If the Doritos Locos Tacos from Taco Bell are not satisfying your diarrheal needs, don’t worry!

The chain is introducing a chef Rick Bayless-inspired burrito that features Flamin’ Hot Fritos corn chips as a summer-only item until early August.

The burrito, which will retail for 99 cents, has rice, warm nacho cheese, beef, sour cream, and Flamin’ Hot Fritos corn chips cultivated by Bayless himself, deep in the villages of Oaxaca.

Republican leaders hailed the new menu item, although they noted it is being introduced too late to keep the United States from lagging behind Mexico, now the fattest country in the world.  “We’re bringing up the rear,” lamented House GOP Speaker John Boehner.  “It’s not the time to take a load off fannies!”