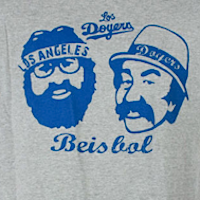 Baseball season starts Monday. For me, it means six months of praying and hoping that the Dodgers can turn their billion-dollar payroll into championship glory.

Those Dodger games can be expensive and explosive. There is nothing better than sitting through the United States’ answer to the soccer (including riots if you show up wearing the wrong cap.) So here is a guide to surviving your outing with Los Doyers.

TIP #1: Be prompt: The reason you want to be there is merely for seating. With the right kind of heart, you can treat the experience like an event with general admission. Do not get greedy.

If you have nosebleed ZZZ tickets, don’t try to sneak in to the A+ section behind luminary celebrities like Fred Savage or one of the Real Housewives. Row G is good enough. Most Dodger fans do not show until the fourth inning anyway. Do not get disheartened if you get kicked out by the real owner. Just pretend to be confused and act like my Tia Chicha trying to set up a DVR. Then be brazen and try to slide into Row F.

TIP #2: Wear proper attire: There is no bigger jerk move than wearing the team jersey with your name on it. You were never drafted, so save your tragic beer league life choices for Wednesday night softball at the park. Avoid wearing Raider jerseys. Nothing says “I’m unemployable and my 401K’s health resides on a pile of scratched off lottery tickets” like a Raider jersey. They are magnets for law enforcement and other people wearing Raider jerseys.

TIP #3: Refreshments: Nothing makes baseball more watchable, like a nice, cold beer. With the right beer, all you remember are the homeruns and the beach balls that made their way into the crowd. However the price of beer requires a cosigner at Dodger Stadium.

For $11 dollars, I want Sandy Koufax handcrafting it and delivering it in the skull of the opposing team’s starting pitcher. I am not advising that you show up blind drunk to the stadium. That would be irresponsible on my part. I’m just saying plan accordingly.

TIP #4: We get it YOU REALLY LIKE the Dodgers: Listen, I like the Dodgers as well but there are some fans that cloak the Dodgers with the infallibility of the Pope. We’ve seen how that’s gone the last couple of years. However, the same applies to you Dodger fan.

I hate sitting there having conversations with you that sound like this, “We should trade our worst player for the American League Most Valuable Player.”

A stroke of genius, but why would the other team do it? I amfully aware that my team is not going anywhere, but at least I’m not a New York Mets fan. Man, their season was over in 1998.

Matt Kemp is not coming to visit you in jail because you stabbed an elderly couple with a sprinkler key because they had the nerve to cheer for the other team. So relax, and remember being a Dodger fan means having your heart broken – not in April, but in September when it matters most.