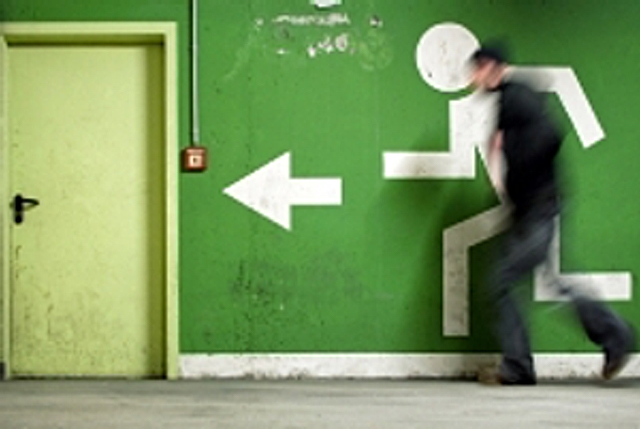 After many jears of being divorce from mijo’s daddy, (that’s a photo of him leaving I took for the lawyer), I share with ju the recipe I make for the Father’s Day, which is on Sunday. When I think of mijo’s daddy, I think of chorizo.

Oso, when I see a good looking chorizo at the store, I think of mijo’s daddy. Get jur mind out of the trash can, cochinos. Is because mijo’s daddy make really good chorizo!

He gwas a good cooker before he left me and mijo for that eskeleton lady. I didn’t know how he stuff the meat into those skins (I think they call casings) using a funnel. But now that he has been gone, I have no chorizo. So a course, I learn how to make my own.

This recipe gives 20 chorizos of about 3 inches. Twenty chorizos is more chorizos than I can handle so I freeze some of them for laters.

NOTES:
* At least one hour before starting to work with the meat and pork fat, put them in the refrigerator. This make the meat harder. The meat haf to be a little hard to be able to handle the meat gwell.
* Do not skip the ground pork belly fat; it will help in the curing of the chorizo.
* I buy a small package of sausage casings online and it lasts to make up to 10 lbs. of meat. Thas a lot of meat.

1. Wipe the peppers clean. Take off the stems and cut lengthwise. Remove the seeds, and put in a bowl. Cover with hot water and let sit for 30 minutes.

3. Throw out the water of the peppers and put the peppers in a blender. Add the vinegar and garlic cloves and puree until smooth.

4. Place the pork meat and fat in a large bowl. Add the ground mixture of herbs and spices. Mix well. Add the chiles sauce and mix and mix until is well mixed.

5. Put in the refrigerator for a day in a well covered glass container. This step will make more flavor.

6. After a day mix again the mixture and wrap it in small packages, it will freeze well for months. It can also be stuffed into casings.

How to estuff the chorizo into the casings:

1. Soak the casings in warm water, at least 1 hour until soft.

2. Run lukewarm water through the casings to remove any salt.

3. Tie a double knot in one end of the casing, and then cut off a length of casing. Gather all but a couple of inches of the casing over the nozzle of the funnel. This step remind me of sonething…I don’t remember gwhat.

4. Estart pressing the sausage mixture through, supporting the casing with your other hand. Pack the sausage as tight as you can, but no to the point of no return. When you have filled almost all the casing (or used up all the estuffing), eslip the casing off the nozzle. This is how ju practice safe chorizo making.

5. For a coil, tie the sausage where the estuffing ends.

6. Place the sausage on a clean table and start to make the links.

7. Pinsh the rope into links and twist in alternating ways at the indentashuns using the butcher’s twine or the corn husks.

8. Randomly prick the casings with a thin toothpick or the tines of a fork to release any air that’s trapped. You do not want jur chorizo to throw farts.

9. Hang the chorizo for a day in a dry room with no mugre (thats dirt for you pochos) or insects. If you wish cover with a cheese cloth. This step will help to cure the meat.

Now your chorizo is ready!! Ju haf jur own chorizo!

I like to make it for Father’s Day when mijo’s daddy and the eskeleton lady come to my house for to eat. I make for them chorizo with red salsa, chorizo with the scramble eggs, chorizo with the fried potatoes, chorizo tacos, and Tinga Poblana with chorizo all on the same day. Ebery jear mijo’s daddy says, Lencha, there’s mucho (thas a lot) chorizo in here. And I tell him ju know ju like to eat my chorizo.

And ebery jear I think nothing says I don’t need ju anymore like making my own chorizo.