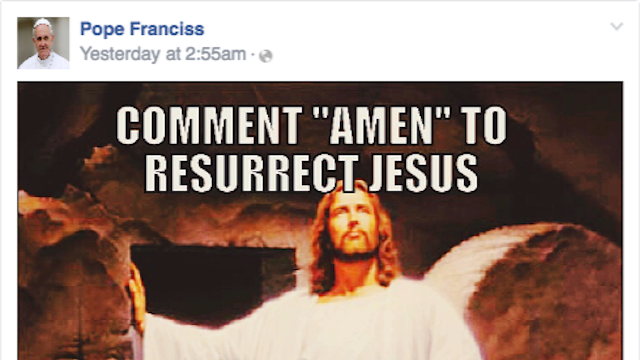 But Benson remained confident. “I know the believers will come through for Him.”

“I like to think that Jesus is looking down on my post, hearing all those AMENs and guiding it to be shared with the right people,” she said. “He will roll away the stone real soon now.”

George Castor, 72, who volunteers at the nearby Etiwanda Police Department, was looking forward to the Facebook resurrection and Rapture to come.

Castor contributed three AMENs to the 9,950, which he sent via his Android tablet, a gift from his son-in-law Hector. But he was unsure, he told PNS, if there was a “one AMEN per Facebook member” rule, but was confident Jesus would forgive him if he screwed up. His “shoot first, ask questions later” credo, he added, is what got him through his time in Vietnam.

“I may not agree with how radical this pope has been, but I will do my part to show my respect to the Lord.”

Castor plans on sharing the post when his grandson Pablo shows him how during his visit this weekend.

The last time he liked a photo, Castor noted, his wish did not come true in 10 seconds as the post promised, but that “you never know if it will be for real this time” and that was a chance he was not willing to take.

In Fort Lauderdale, tears rolled down 64-year-old Caroline Pilsner’s face as she shared her reactions with the Florida Man Facebook group.

“My heart aches imagining Jesus sitting in front of his computer seeing that post not make it to 10,000 AMENs,” she wrote. “I’m crying right now.”

The part-time Walmart greeter lost sleep, she said, as the number of AMENs seemed to stall, but she remained thankful for the friendships she made along the way.

“I feel so blessed to call Pope Francis my Facebook friend. I feel like he’s really connecting with the people more than any other pope. He likes minions and wine just as much as I do.”

Sydney Presley, a Southern California native without washboard abs and facial hair, lives in West Covina, where she enjoys all things DIY and has never met a michelada she didn’t like. She’s EMO_EXTREMO on the Instagram.