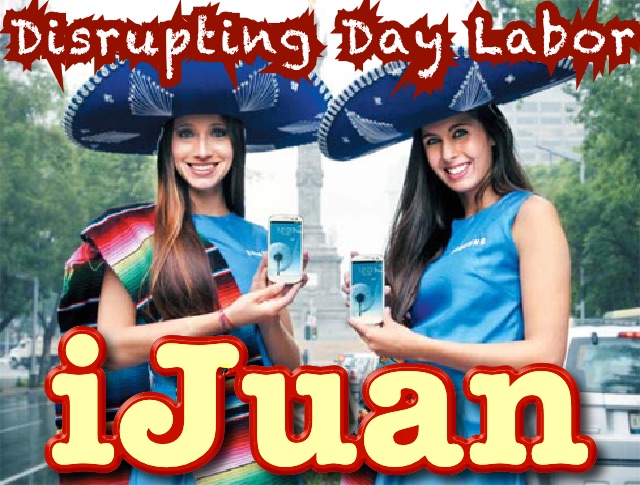 “The narcotraficante business is getting to be unpopular, what with all the deaths and shit,” XS Dinero CEO L. Gato Negro explained. “All the cool cartels want to get into software — and Takis. Since Takis is controlled by the Grupo Bimbo Cartel, we invested our excess dineros in an app to help the hardworking Mexicans who fled the country because we fucking ruined it. And if we can suck more cash out of these pobres paisas, orale!”

The ad-supported app (Windex, Red Bull and VapoRub have already signed contracts) has been through vigorous load-testing, according to Del Toro, and, he said, “We’re ready to roll out the product in the third quarter.”

“We spent a lot of time identifying the services most requested from day laborers, and that’s why we’ll be supporting worker and employer signups for both traditional and 21st-Century assignments,” he said. “The dirty money capital from XS Dinero will be used to manufacturer and distribute bootleg DVDs announcing the product at flea markets and swap meets across the Southwest, and we’re planning on moving up to Chicago when the weather gets better.”

While the list of services is still be finalized, Del Toro says workers and employers can expect to find these specialties:

“When we get into the Florida market,” she said, “we’ll be rolling out new Hispanic Caribbean specialities like Brujeria, Balseros, Reggaeton Rehab, Cuban Sandwich Pressing and Boricua Mansplaining.”

iJuanCo is one of the startup firms lured to Guanajuato by Gov. Alejandro Ramirez Sanchez de Bernstein, as he works to broaden the region’s economy. Until recently, the area was dependent on the sale of Guanajuato’s primary exports, guano and, of course, juato.