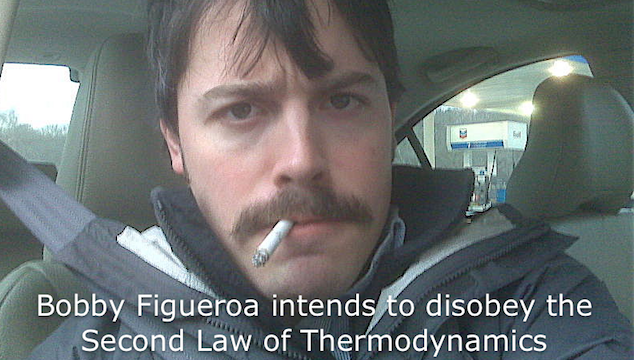 “I don’t mind working hard to to make things better, but it really pisses me off having to hustle all the time just to stay in place.”

“One day it’s light bulbs burning out, next thing you know you’re out of goddam toilet paper oh and where the hell is that W-2 I need for taxes?” he said.

Figueroa, a dispatcher with Allied Trucking in nearby East Harnwell, dismissed the Second Law when friends brought it to his attention. “This entropy crap is just more phony baloney elite scientist bullshit, like global warming and how bacon is bad for you,” he said.

“The hell with the so-called law!” he shouted, startling long-time Babosa’s waitress Manila Envelopé who then tripped on the bowling bag he left next to the table and dropped a steaming Number Four Combo (two tamales, two soft tacos, rice and beans [Carne Asada add $1.50]) on Figueroa’s lap. “Ouch!” he added.

Figueroa’s live-in girlfriend of eight years, Tamara Sefira, a florist, left him last week, claiming a breakdown in communication. Figueroa refuses to believe this to be the case, insisting she is seeking thermodynamic equilibrium with the town’s mailman. “Good riddance. I hope she increases his entropy,” he told friends.

As a passive-aggressive act of disobedience, Figueroa plans to leave all his groceries out on the countertop, refusing to refrigerate even the most perishable of items, including that queso fresco she used to love so much.

Elise Roedenbeck assisted in field reporting for this story.