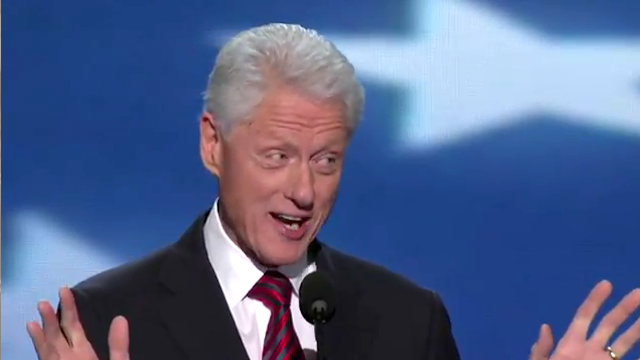 Ex-Presidente BILL CLINTON spoke to the Democratic National Convention last night before heading out to a night of debauchery and cheeseburgers in Charlotte.

Sure, you might say he delivered a good defense of Barack Obama’s awful Presidency.  But he filled the whole long rant with PINCHE BORING FACTS and even ARITHMETIC!

If you watch Fox News or listen to my man Rush, you know that  facts will not get in my GUEY. You know that OBAMA IS THE MOST DIVISIVE PRESIDENT OF ALL TIME BECAUSE HE HAS DIVIDED THE RACISTS FROM THE NON-RACISTS.

Don’t get me wrong, I respect Bill Clinton. Sort of. BILL CLINTON TAUGHT ME EVERYTHING I KNOW ABOUT COLLECTING VIEJAS.

You think you invented chubby chasing?  NO GUEY! I LIKE A FAJITA ON A GORDITA TOO, GUEY. But having viejas on the side, while being a redeeming quality, is not enough to erase the ugly truth:

Clinton was going on and on in between apologies to Hillary Clinton, about how much he loved ALL THE WOMANS. We know, guey!

HE LIKES WOMENS WITH BIG BICEPS AND STRONG KNEES.

He not only went after my whole pinche platform of SELF-LOVE and PRO-RICH DUDE POLICIES, but he went after my precious Eddie Munster VP. DON’T YOU TOUCH MY POLLO RYAN, CABRON. Clinton said you gotta have BRASS BOLAS to accuse someone of the same thing you did. WHATEVERS.

YOU ARE A BRASSHOLE, PINCHE CLINTON. TIME FOR THE SHADES AND THE SEXOPHONE, CABRON.

I’ll tell you another thing:

MY HUEVOS MAY NOT BE BRASS, BUT THEY ARE NATURALLY THAT COLOR.

To sum up my review of Bill Clinton’s SUPPOSED TRUTH-FILLED ESPEECH, it felt longer than when I take my viejas shoe shopping.

His speech was SOOOOOOOO long, I went outside and gave my pick up troka a tune-up, drove to Juarez to feed my chivos, came back, and CLINTON WAS STILL TALKING.

He kept going on and on even backstage. I heard CLINTON WAS IN THE PARKING LOT SIGNING RACKS, I can assure you he used a “FELT TIP”!

Pues, I hope you are happy, pinches Democraps. His attacks were not fair, but you wanna know what’s REALLY NOT FAIR?? After Clinton bashed the mierda out of my campaign, and he and OBAMA  got to go TO CHARLOTTE’S FINEST STRIP CLUBS.