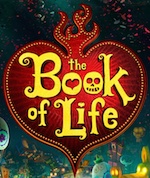 The Book Of Life movie premiere was this weekend, and POCHO Jefe-in-Chief Lalo Alcaraz was there. He thinks it is a beautiful, lush and fun familia film.

Check out this brilliant report that explains the origins of the pelicula and features writer and director Jorge Gutierrez, executive producer Guillermo del Toro and Lalo at the end, talking about the whole Disney/Pixar Day of the Dead trademark flap.