He had just left a fancy restaurant, celebrating a big achievement, a Ph. D. degree, when he encountered racism, racism that can hurt your health. 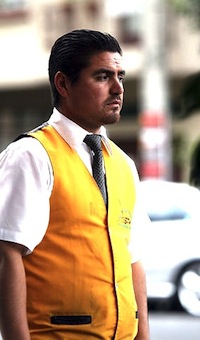 The day Dr. Roberto Montenegro finished his Ph.D. was memorable. But not for the right reasons.

“I still cringe when I think about it,” says Montenegro.

It had started well. His colleagues at UCLA had taken him and his girlfriend (now wife) out to a fancy restaurant to celebrate.

“I was dressed up in the fanciest suit I had at the time and my wife looked beautiful, like always,” he says. “We laughed and we ate and we were excited we didn’t have to pay for this.”

Montenegro was elated — celebrating a hard-won step toward his dream of becoming a physician-scientist. There had been so many late nights, so much work. But now, he had a Ph.D. in sociology and was headed to medical school at the University of Utah.

“I felt like a king,” Montenegro wrote in an article for the journal JAMA last year. At the end of the evening, the couple got in line to pick up their car from the valet outside. They were third in line when a Jaguar pulled up to the curb.

“And you see this woman get out of her car,” says Montenegro. The woman must not have seen the valets, though they were wearing red vests.

This is not a unique experience. In 2012, POCHO Jefe-in-Chief Lalo Alcaraz finished speaking at a Beverly Hills panel on digital media trends, and when he went outside to get his car…… you guessed it.

Lalo’s story here: Standing While Brown — A White Lady Tried to Get Me to Valet Her Car