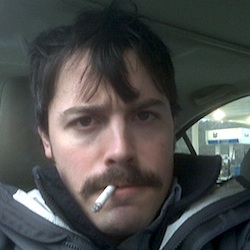 “I can haz the sad,” Murietta Tweeted, but quickly deleted the message after realizing his wife, Tonee Peres Murietta, Class of 1999, might ask him what was wrong.

Sonnenshein, who was 33, is survived by her husband Jonathan, an Atlanta attorney, and daughters Kimberly and Anna. Friends can make contributions in her memory to PETAofATLANTA.org.

It took a few more page flips, but the successful mortgage banker and father of two was somewhat heartened to read, in Alumni Notes, that fraternity brother Ron “Twitchy” Mather, Class of 1997, had been appointed a senior vice president of the noted Boston architectural firm Wainscots, Crown, Molding and Parquet.  Mather still lives — with his long-time partner Charles Lombard — in the Cambridge home where was born. He encourages old friends to write him at nolongertwitchee1977@gmail.com.

“Give old Twitchy a Ritalin and a bunch of empty Schmidts cans and he could build an beer can tower in somebody else’s dorm room faster than any man alive!” Murietta chuckled to himself.

But he couldn’t Tweet about that either. Damn Tonee.