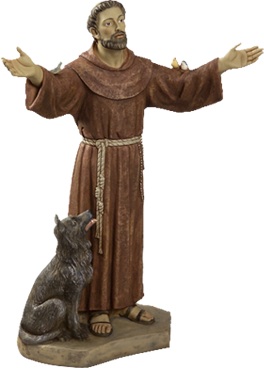 La Virgen de Caridad and La Virgen del Socorro were also in attendance, but not bothered by the issue.

Saint Francis of Assisi (photo, left, with dog Dylan) is happy appearing only to dogs “although some kittehs would be nice once in a while, jeez,” he said.

There was a developing consensus  that Guadalupe’s miraculous appearances were at least beginning to get annoying.

“If she’s not appearing on a piece of toast, a tortilla, a window, a tree, a puddle, a tattoo or a lowrider, she’s talking incessantly about her next move,” said La Virgen del Socorro.

For her part, Guadalupe sat bemused and quiet throughout the discussion, stepping out only briefly to appear in a bowl of menudo in Chicago.