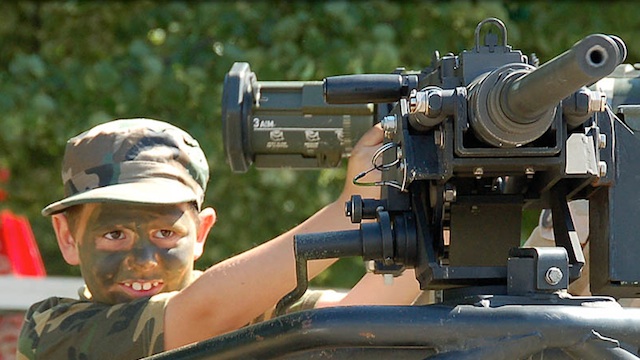 Schools in places like Cave Creek, Fountain Hills, and Litchfield Park may soon see some of Arpaio’s grenade launchers reach their first and second graders. The kindergartners are still undergoing training.

“This is at no cost to taxpayers, they furnish the kids, we supply the grenade launchers,” Arpaio told patrons at “Double Shot and Beer Night” Sunday evening at Ricky’s El Cerveza in Phoenix. “I have a shitload of these babies and need to move them.”

Arpaio’s posses have been patrolling malls during the holidays and handing out shotguns to toddlers. This year, the volunteer group accidentally shot 31 children but Arpaio believes just their presence serves as a deterrent for crime.

“Yes,” he told patrons at the gentlemen’s club,” they have shot some kids by accident but the posse has the same training regarding guns as our regular deputy sheriffs – over 100 hours of training, plus refresher courses… We should never have a defeatist attitude. Look to the future and take whatever precautions we can do. I don’t just want to talk, I like action. I want these little bastards armed to the teeth. ”

Horne plans to arm a principal or teacher in every school with rocket launchers and a death laser perimeter around every playground.

“If we had the budget for moats filled with sharks and alligators with lasers strapped to their heads in all schools there’d be no need for my program, my program is second best,”  Horne Tweeted to followers, except he did it in in 140 characters or less.

The budget for moats filled with sharks and alligators with lasers strapped to their heads has been slashed by 46% in the past three years, but there’s debate over whether arming staff members instead is a good idea.

A spokesperson for Arizona schools superintendent John Huppenthal says they are looking at a number of proposals:

In addition to potentially adopting one of these approaches. We would want to ensure all schools and districts are armed to the fucking teeth to create the safest possible environment for our students. We might ban books here but goddamnit, we’re not stupid.

A spokesperson for Governor Jan Brewer said there are multiple proposals floating around right now. At this point she has no comment, mostly because she’s still completing her GED course.