(PNS reporting from AUSTIN) Fido and Fluffy have become collateral damage in the war between the rival QuinoaTraficante and ChiaTraficante agricultural cartels.

PETA said this includes Fido and Fluffy, of Barton Creek, pictured (above) in the organization’s latest Web ad. 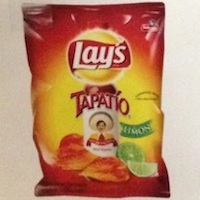 Some, like POCHO amigo Gustavo ¡Ask A Mexican! Arellano, say it started with Tapatio-flavored Fritos, Doritos, and Ruffles.

Others trace the flavor reconquista to Starbucks’ testing out nopal-flavored espresso drinks in East Los Angeles. But know this: The national introduction of Tapatio-flavored Lays potato chips next week is only the beginning.

Flavoristas say you should look out for these Pocho Ocho Mexican-flavored products in the near future: