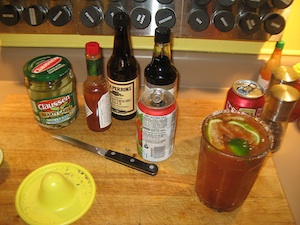 Hola. Is Tia Lencha here. My recipe today is inspire by a gringo who saw me drinking a Michelada with my comadre Mari Carmen cause it was Comadre’s Night Out. The gringo tole me, “Escuse me, is that a margarita?”

I wanted to say: No, is a Michelada, menso! But I think thas not classy and I put my hair all spray so I look classy. So I no say the menso part, even though I know he don’t know what menso means.

And you know what? In that momen, I had a revelation, like when Dios or tequila speaks to you…and I know… is my responsibility to teash the pochos about Micheladas.

The recipe for a basic Michelada is:

But whats so good about Micheladas is that it can be so much more. You can put hot sauce in it, or slices of chile, or sauces like Maggi, Worcestershire (thas a mouthful) sauce, Clamato, or clam juice. Some people put orange slices but Tia Lencha don’t know about all that.

You have to know when you drinking Micheladas that eberyone makes them different. Sometimes you ask for a Michelada and you get the beer with the Clamato. Sometimes they call a Chelada the one with lime and salt. And according to the Wikipedia, the Cubana has Worcestershire sauce, hot sauce, chile and salt. It don’t matter. No matter which fake Mexican restaurant in a strip mall that you visit, the ingrediens will change.

Here are some tips for ordering the Michelada:

So after I had the revelation, the pocho, who was what you call it? One of those mensos with the tight pants? A hipster. He ask where the Michelada come from. I wanted to say, who cares? Are ju a historian of booze?

But I think it was Dios or the three Micheladas I had that whisper in my ear, and I tole him, “Is the new margarita.”