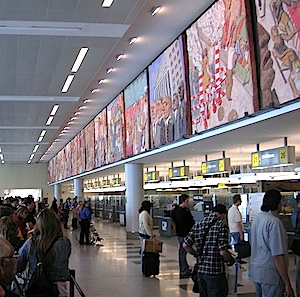 (PNS reporting from CHICAGO) Hundreds of thousands of undocumented immigrants brought to this country as children are applying today for a deportation reprieve under a new program established by the Obama administration.

DREAMers will receive a two­-year deferment of deportation proceedings. If approved by U.S. Citizenship and Immigration Services, those DREAMers can also apply for a work permit and later reapply for another deportation deferment.

Some of the details of the program are still being ironed out. Eliseo Medrano of Aurora, who was lined up (photo, left) at the Chicago FCIS Office said, “I didn’t know there was going to be a talent portion to the application today. I suppose I can sing “Volver” or something.”

Applicants will be asked for various types of proof they have been upright demi-citizens in the U.S. for some time, including:

Several elderly immigrants were detained in the Denver, Colorado area trying to pass for 30. A 70-year-old woman reportedly had on skin tight jeggings, a Justin Beiber t-shirt and Crocs. One viejito, known only as “Chavo” was dressed in a striped shirt, red suspenders, brown khaki shorts and a green hat. All of them were promptly deported.