First was a snail mail letter (photo) to POCHO amigo Russ Contreras, from a previously-unknown-to-us organization called Hispanics Against Latino Term (HALT). They have a two-chile logo.

Señor HALTero is “Against [being called] Latino” because, first of all, his roots are in New Mexico, and he’s not from “Latin America” (because it doesn’t exist — I mean where is the flag of this “Latin America”? The capital city? Doh!)

His people, he wants you to know, came to what is now New Mexico from Spain when this expanse of North America was New Spain — there was no “Mexico,” old or new, then.

He didn’t mention swarthiness and stupidity.

Numero dos was KNBC-TV (Los Angeles) tech reporter Mekahlo Medina, who isn’t “Mexican, not that there’s anything wrong with that”: 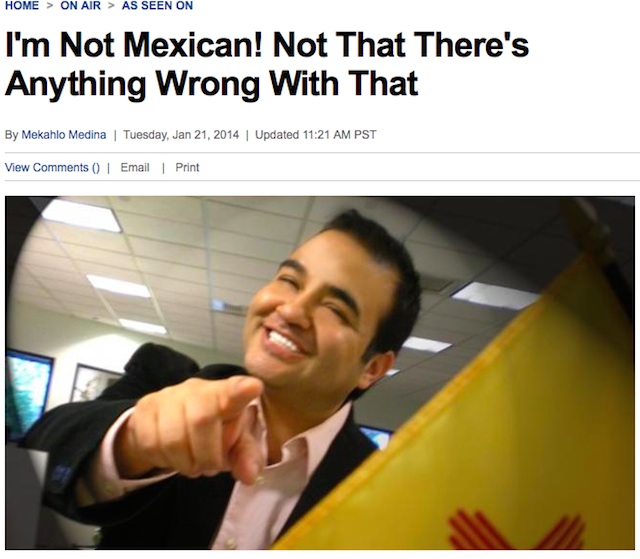 The screen capture (above) is from a page that is no longer found on the NBC Los Angeles website — we found a cached version.

Medina has the same beef as the HALT guy:

Not a Mexican newly here to the United States.

A “New Mexican” from the state of New Mexico. I have the gold flag with the red zia symbol on my desk to prove it. My family has been there since the 1700s.

I’m not dissing Mexicans. Their culture is rich and great.

It’s just their culture, not mine….

Finally comes this column from J.C. Cortez, Managing Editor of the Borger News-Herald in Borger, TX: 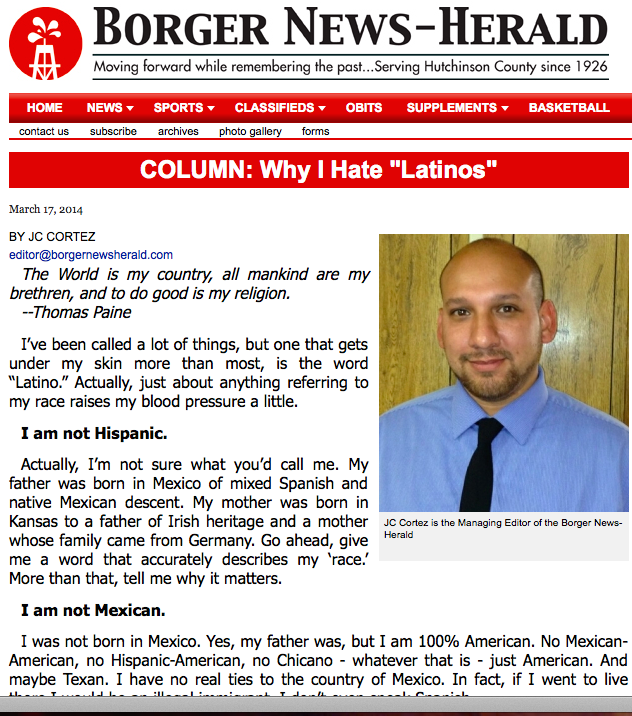 I am not Mexican.

I was not born in Mexico. Yes, my father was, but I am 100% American. No Mexican-American, no Hispanic-American, no Chicano – whatever that is – just American. And maybe Texan. I have no real ties to the country of Mexico. In fact, if I went to live there I would be an illegal immigrant. I don’t even speak Spanish.

Most of all, I am not Latino.

Whatever it means to be “Latino,” I am not it. I don’t really fit into any of the neat stereotypes that are laid out for brown people.

What is the purpose of a label like that to an individual? It helps politicians plan strategies and it helps advertising companies manipulate demographics, but what does it really matter to you if you are “white” or “black” or anything else?

These labels are for separating, confining, and controlling. They don’t mean anything beyond drawing lines between people.

While these writers all make valid points, why do you think they are emerging from the shadows to proclaim their non-Mexican-ness now?

[EDITOR’S NOTE: Author Comic Saenz is descended from those noisy, uncouth, dirty, Yiddish-speaking, garlic-smelling Polish and Russian Jews who need to clean up their acts. Some of his best friends are Mexicans.]

PREVIOUSLY ON WHO ARE YOU:

HOW DO YOU IDENTIFY YOURSELF?
SET THAT COMMENTS SECTION ON FIRE! 😉