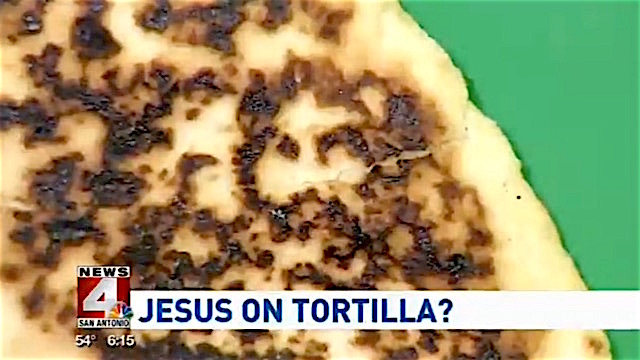 Employees at a local nonprofit believe the image of Jesus appeared on a homemade tortilla. They call it divine inspiration to start the new year.

“It does kind of resemble Jesus,” Michael Shackelford with Alamo Community Group says.

A spiritual sign with a twist that’s Puro San Antonio.

That’s when his boss noticed the image of Jesus burned onto the flour tortilla. “Her husband was starting to eat it and just happened to look at it by chance, and was amazed by it,” Shackelford says. Shackelford took a picture and posted it on Facebook.

“People are saying wow, you’ve been blessed today,” he says while reading comments on the photo.

Guadalupe showed up at a Mexifornia taqueria Sunday night at 9:30 PST, 8:30 Central:

By popular demand: #thevirgenenmitortilla from the #Bordertown pilot. Enjoy!