Grown men and women from coast to coast have been spotted kicking and screaming in broad daylight over the election and even famed rocker Ted Nugent was said to have cried “tears of blood” over the re-election of a “black guy.”

The White House promises that, “If a petition meets the signature threshold, it will be reviewed by the Administration and we will issue a response.”

No one expected the President to respond so quickly but he wasted no time in exercising his executive powers with the Sunshine State. When it became clear that Florida’s coveted electoral votes were not even necessary for Bama’s 2012 victory, the President said he felt “at ease” letting the state go.

During a press conference regarding the secession, Bama said he looks forward to diplomatic relations with the budding country and also for the people of Florida to “kiss his black ass”.

“My fellow Americans, the State of Florida has long annoyed the rest of the United States. We have endured their Cubans, their rednecks, their Mickey Mouses and their serial killers. We have put up with their neighborhood watch captains, their sports franchises, their hurricanes and their cocaine cowboys. We have suffered through their bath salts and even their zombies. Well I say: enough is enough. If the people of Florida want to fare for themselves then be my guest.  I wish them good luck and remind them not to let the door of freedom hit them on the ass on the way out,” Bama said.

According a recent PNS poll, most Americans “don’t give a shit” if Florida becomes its own nation or even if it floats away into the ocean.

Official spokesperson for the Florida secession movement and former Saturday Night Live actor Victoria Jackson, told PNS the new nation was undecided about what to call itself but is leaning towards “Dipshitistan.”

“Well, I think this is a really great thing. The President is a Muslim, communist, atheist, Satanist, African, Mexican socialist and we don’t stand for that. We’re going to have our own form of government down here that stands for something again! And from what the guys have been telling me it sounds really cool, it’s called ‘the lottery’ and everyone gets to vote with these big rocks. We’re really gonna rock the vote now, Barry!” Jackson said.

There has been no comment from Florida Sen. Marco Rubio on the secession yet but local witnesses reported seeing him sailing on a homemade raft off the coast of Key West, allegedly in the direction of Cuba. 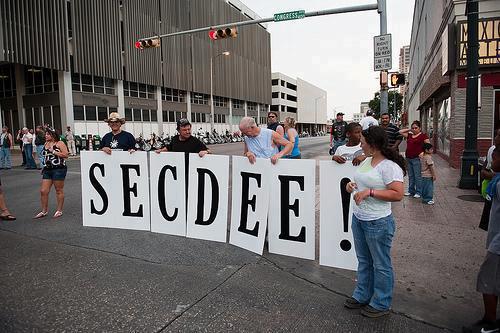