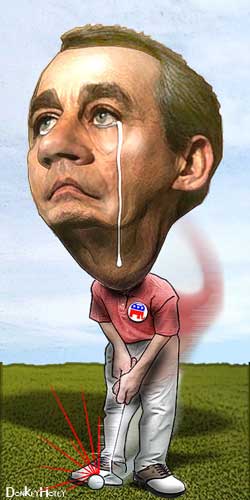 (PNS reporting from WASHINGTON, DC) As the Republican-controlled House of Representatives left town for a five-week paid vacation, GOP leaders warned members returning to their home districts to be on high alert because of unspecified “threats of liberalism.”

“These liberals are out there with their ‘logic and facts and science,’ and all our malarkey will Ben Ghazi in our faces if we’re not careful,” Speaker of the House John Boehner (R-OH) cautioned in a memo to his partisans Friday.

“Members are urged to stay close to their vacation retreats in gate-guarded communities, hunting lodges, country clubs and private marinas,” Boehner wrote, “and avoid potentially hazardous areas that may harbor liberals and their sympathizers. College campuses, where Republicans can easily get bamboozled by Improvised Intellectual Debates (IIDs), are particularly dangerous.”

“Have your manservant, or whoever carries and dials your iPhone, inform us here in Washington as to your whereabouts at all times,” Boehner advised. “Also, close your field offices if possible, as they might be subject to visits during office hours from piss-ant constituents petitioning the government for the redress of their grievances. These so-called ‘ordinary citizens’ don’t even have powerful and generous lobbyist friends in Washington, so they show up themselves, totally uninvited! Can you imagine?”

“There’s somethin’ happenin’ here. What it is ain’t exactly clear. There’s a man with a brain over there, tellin’ me I got to beware,” one Twitter snooper told PNS. “This is scary! As scary as gay people I don’t know getting married in a state 2000 miles from here, a state I’ll never visit and where I know no one!”

The warnings were echoed by House Majority Leader Eric Cantor (R-VA), who said the threat was particularly acute from a segment of the populace “who are ‘packing vaginas.’ These so-called moms, sisters, wives and daughters can make you cry if they catch you telling lies, so don’t talk to them, with them or at them.”

Cantor also reminded members to tell their chauffeurs not to follow leaders and to watch their parking meters.