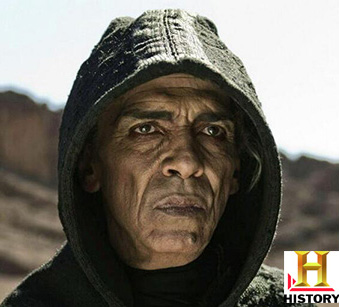 “We respect the President and we are not biased. If we cast a dark-skinned actor to portray all that is evil about the world, that’s just a silly coincidence. False statements such as these are just designed as a foolish distraction to try and discredit the irrational, anachronistic story of The Bible.”

The History Channel also set out to put an end to the rumors, saying the show aims to feature “a diverse cast of respected actors.” In fact, the History Channel offered proof that their mini-series is not biased against Obama by releasing a still from the show depicting the actor who played Jesus Christ.

“History Channel has the highest respect for President Obama,” the network said in a statement. “It’s unfortunate that anyone made this false connection. Just look at the actor who is playing Jesus Christ. He  just happens to look like someone good, benevolent and job creating. This is the most fair and balanced mini-series since the Fox Business Channel produced the 2008 slavery epic Roots 2: Go Back To Africa.

After Sunday night’s episode, scores of viewers took to Twitter to note a resemblance between the show’s Satan character and President Barack Obama.

“That guy playing Satan in ‘the Bible’… does resemble the president,” one user wrote. “I would like to see his birth certificate.”