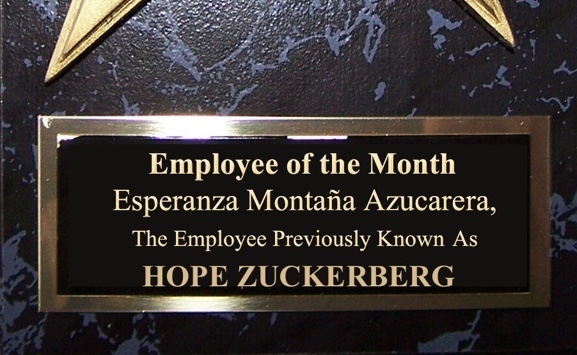 But I am not going to change my name to signal to White people I am Native, or Mexican, or Mixed Race, any more than I am going to get a Virgin of Guadalupe tattoo or wear large hoop earrings.

I am also not going to wear my hair in two long braids to a business meeting or start wearing white embroidered dresses from Oaxaca or the Yucatán. Nor will I wear embroidered moccasins from the Dakotas. Or embrace any other “style” White people associate with my heritage.

Clothing, tattoos, and jewelry can be deeply meaningful, and often are. But what I wear has meaning to me, and will not be worn to virtue signal to White people.

Many White people today expect — even demand — to see physical evidence of heritage. They want a dark face for their employee photo page, or a Spanish name to list on their masthead or in production credits or on their website, to prove diversity. They want the name as their own badge of progressiveness.

Perhaps it is a side effect of White, systemic ignorance.

And the idea of what appears Native is based on, at best, a misguided White system of popular media.

But, that is why the name is so important and a perceived easy fix. When people can’t see you to peg you, or are unsure of how to peg you when they look at you, they want to at least be able to peg you by name.

So, my current name signals to many that I am White. But my features are where my mixed-race heritage comes through, while my skin color is often too light to be considered a person a color, or to automatically give a White company the diversity cred it seeks — even if my skin is leche con miel colored (milk with honey, as a former boyfriend from Ecuador used to say).

Yet that descriptor, too, is an intentional White system that people of color have adapted. It is language and lines drawn, taken from colonizers. It might be adopted, now, by the mixed-race people of the Americas, who use café con leche, café negro, chocolate, canela, and so much more as ways to describe and adore the shades of brown and black skin, hair, and eyes that mixed-race people have.

It might even be a “diversity” and poetry White people envy.

But this gradient shade language was used to sell slaves, to entice buyers to spend more money on lighter colored, commoditized human flesh. The darkest were the least valuable, and intricate systems were developed to place value based on skin tone.

Look around in mass media. You don’t need to look very far to see it. Blood quantum and the one-drop rule are very much with us today, even if they aren’t popular topics of conversation.

Given all of this history, only touched upon here, why would I swap one colonizer’s name for another? Why should I change my name in order for a White system to know immediately how to peg me, commoditize me, and make money on me—on my name?

I am the same person I was before I “came out” as Mixed Race. I do the same work. Do I really need to change my name to satisfy some White notion of woke-ness?

Haven’t I already paid enough for the lingering effects of genocide, with its effect on my own family? On my own mind?

Valerie Vande Panne is a Next City Equitable Cities Fellow and a freelance writer. She travels extensively throughout the United States. Her work has appeared in Bloomberg, Columbia Journalism Review, In These Times, and Politico, among many other outlets. She is a former news editor of High Times, and the former editor-in-chief of Detroit’s alt-weekly, the Metro Times. She’s @asktheduchess on the Twitter.