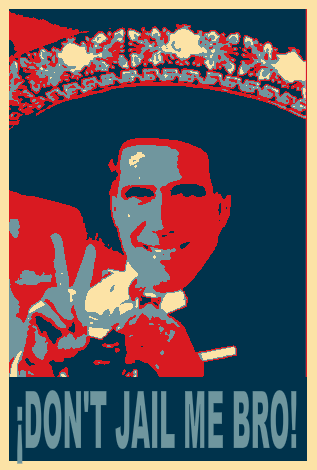 Mexican Mitt Romney wrote this estatement when he was incarcerated in the Twitterham City Jail.

LETTER FROM A TWITTERHAM JAIL

While confined here in the Twitterham City Jail, I came across your recent statement calling my present activities "unwise and untimely."

Seldom do I pause to answer criticism of my work and ideas.

If I sought to answer all the criticisms that cross my desk, my secretaries would have little time for anything other than such correspondence in the course of the day, and I would have no time for constructive work.

But since I feel that you are men of genuine good will and that your criticisms are sincerely set forth, I want to try to answer your statement in what I hope will be patient and reasonable terms.

Apparently, someone was misled by my account, which portrays Mitt Romney as a cartoonish Mexican ranchero. This indicates that this person was an estupido idiota pendejo, meaning he is a Republican voter.

I call them my base. Ajua.

The other possibility is that the legal representatives, or the person being parodied, AKA the Mittster himself, or his campaign, complained directly to Twitter on the night of Mitt Romney's RNC speech and a $120,000 buy of a Twitter trending topic. Hmmm. Don't pee on my sombrero and tell me it's raining. Who knows?

Twitter, or as it is known back on my old polygamous Mexican compound, Tuiter, worked with me during my incarceration period to rehabilitate me so that I may be released back on the streets and not be a danger to the feeble, humorless minds of right wing dumbasses.

I have done some reflection during my long period of incarceration, and I have learned much. First, people are more stupid than I even imagined, and secondly, never, ever, ever invite Clint Eastwood to any event, not even a birthday party, and especially not a yard sale involving furniture.

Never before have I written so long a letter. I'm afraid it is much too long to take your precious time. I can assure you that it would have been much shorter if I had been writing from a comfortable desk, or from one of my six homes.

But what else can one do when he is alone in a narrow jail cell, other than write long letters, think dirty thoughts and pray for contraband?

If I have said anything in this letter that overstates the truth and indicates an unreasonable impatience, I beg you to forgive me. But seriously, don't be a pendejo. It's annoying.

Happily all is resolved, and I have recovered all my gueyes, or followers, and have even added about a thousand new ones, so, even though I was sending out my tweets during my big speech at Tampax through smuggler cybercholos, I did gain something to make up for my long time here in La Pinta.

Let us all hope that the dark clouds of stupidity will soon pass away and the deep fog of misunderstanding will be lifted from our fear-drenched communities, and in some not-too-distant tomorrow the radiant stars of love and brotherhood will shine over our great nation with all their scintillating beauty.

Yours for the cause of Peace and Brotherhood,

(Yes, I took a correspondence Reverend course while I was locked up. God bless. )