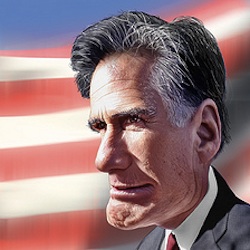 Going after the gastronomic vote, Dems and Repubs plan to offer Latino voters free tacos and salsa at the polls (all tacos made by immigrant labor.) Mitt Romney has even changed his tune about cheesy grits, now heralding cold maduros as his favorite breakfast.

Both parties are promising to fund and sponsor television programs about Latinos including shows about sexy maids, deep-thinking gardeners and homesick homeboys. Obama made his weekly address with the addition of two scantly clad Latina hotties by his side and a little person dressed as a sunflower. Romney is more timid in matters of sexuality but did allow a three-second shot of his butt to air in one of his campaign ads (for las viejitas.)

Republicans are promoting their new Dream (On) Act, which says, “You must be dreaming if you think we’re going to help you!” Champion of the act, Marco Rubio, stated “it’s well known that Latins are by and large a people of short stature, it’s only natural they’d count as 3/4th of a citizen…” then adding, “I’m allowed to say that, I’m Latin.” In effort to win back Latino voters, Romney has announced an additional plan called The Love and Limbo Act. Just because you’re stuck between the country you know and a foreign land you don’t remember, doesn’t mean Romney doesn’t love you. You can’t be a citizen, but you are eligible for a free limbo stick!

A bipartisan effort has been made to rename part of the Pentagon the ‘Celia Cruz Wing’ after the beloved salsa singer. However, Republicans insist ‘Celia’ should be pronounced in the English fashion. Additionally, Romney will unveil a plaque over his 9th fireplace in his estate to commemorate the nine-year anniversary of her passing in 2003. Meanwhile, unable to get on the salsa craze, Nancy Pelosi clouts her new-found love for Afro-Cuban jazz, stating she enjoys a more eclectic, worldly sound that is culturally approved by PBS.

Both Dems and Repubs promise cliché slogans, websites and empty promises to disillusioned Latino voters looking for something flashy. While Democrats continue offering lukewarm handshakes to Latino voters (failing to realize Latinos by and large, consider handshakes weird), GOP hopefuls have been passing out long-distance phone cards adorned with sexy ladies and Central American flags. To show off his generosity, Romney has graciously offered an all-expenses-paid deportation. The self-deportation bus (el guagua de fuera) leaves every day at 6 PM from the corner of each of his estates.

Repubs are offering to choose a “Hispanic” for vice prez, which they believe will make up for all the other racist things they’ve said and done. Most obvious is Cuban American Marco Rubio, whose political record is unimpressive but who makes a killer lechon. When ask what he thinks about JFK, Rubio stated “he makes me want to throw-up…” and waiting for his Cuban constituents to leave before adding, ‘…throw-up delicious guacamole and have a fiesta!”

Dems are offering to project holograms of Selena, Desi Arnaz, Celia Cruz and Ritchie Valens at the polls while Latinos vote.

Both parties are offering a ‘vote now, deport later’ program which will allow people to vote for their candidate of choice and receive a coupon for a year’s worth of no deportations. (Offer not valid in AZ, GA, AL, MS, LA — also, dependent on acquiring your official voter registration ID.)