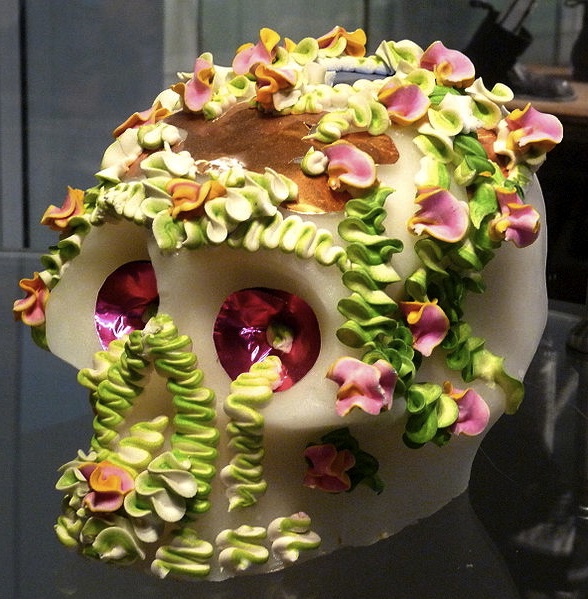 Happy Day of the Dead! Is Tia Lencha here. Many people ask me questions about Dia de Los Muertos. I answer the questions today.

Question numero one: Tia Lencha wass this Dia de los Muertos? Is it the Mexican Halloween?
Gwell, kind of, I say. Except that the Day of the Dead celebrations come from the indigenous pagan rituals that trace back 2,500 to 3,000 years ago. Way before Duane Reade sold Halloween candy.

Question numero two: Tia Lencha, wassup with the calaveras (“skulls” for you pochos)?
Bueno, before Jesus came along, people used to keep skulls of their loved ones (and maybe not so loved ones) as trophies. They showed off the skulls during the rituals as symbols of death and rebirth. Kind of heavy, no? I never say my history was all tequila shots and tacos.

Also, calaveras can be short poems, like epitaphs like to mock your friends. Like you can make fun of them on their tombstones. Like for mijo’s daddy, I wrote a calavera about him call “Oscar Meyer” because he like to stick his weenie ebrywhere! He no think it was so funny.

Question numero three: Why are the skeletons dressed up like people?
The Aztecs use to celebrate the Day of the Dead for a whole month and dedicate it to the goddess they call the “Lady of the Dead” who is the modern Catrina (meaning rich lady show off). The skeleton lady always wear fancy clothes and a hat. She remind me of the 24-year-old skeleton my hijo’s daddy married.

Question numero four: What do you put on a Dia de Los Muertos altar?
People put the favorite foods and drinks and photos and things that belong to the departed. This is to say “Welcome!” to the spirits of the dead to visit you and the souls to hear your prayers and comments that you say to them.

As a little girl in the rancho, I used to eat the tamales and pan de muerto (bread of the dead for you pochos) that my mama would put out for my dead relatives. She always told me that the dead people ate the food first so it had no nutrients. I don’t know if it had nutrients, but it taste real good.

Question numero five: Why so many orange flowers?
In Mexico, people visit the cemeteries where their loved ones are bury and decorate their graves with ofrendas (“offerings” for you pochos), and they put orange Mexican marigolds called cempasúchil (which I can’t pronounce but is Nahuatl for “20 flowers”). They also call them Flor de Muerto (Flower of the Dead). These flowers are thought to attract the souls of the dead to the offerings.

Mijo tells me his daddy buy a lot of flowers for his skeleton wife. Maybe to attract the soul of someone who make her eat a torta?

Question numero six: What are good ofrendas (offerings) for the dead?
Toys are brought for dead children and bottles of tequila, mezcal or pulque or jars of atole for adults. Families also bring trinkets or the dead person’s favorite candies to the grave. The foods used as offerings are usually candied pumpkin, a sweet egg bread call pan de muerto (bread of the dead), and sugar skulls.

If you ask Tia Lencha, you only need the tequila, mescal, or pulque. No bother with the rest.

Question numero seven: Isn’t it bad luck to celebrate the dead?
No. Some people believe that if they have Day of the Dead skulls and things it bring good luck. Some peoples get tattoos or have dolls of the dead to carry with them in their purse. I going to get a tattoo of a calavera so I can get a novio. I tell you how it go. OK?