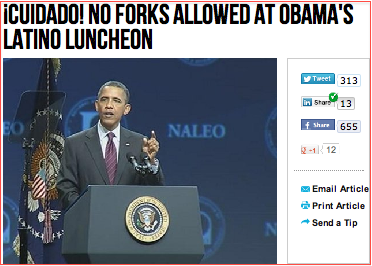 The crack news team blew the teapot dome off the clandestine Operation Fork & Furious caper wherein Kenyan Kommissar of Kutlery Barack Obama plotted to take forks from Latinos and give them to socialist elites, the first step in appropriating all of our sharp AND dull eating utensils.

If Operation Fork & Furious succeeds, Kenyan-Mexican Dictator Barack Jose Obama will confiscate all silverware and force all Americans to eat with tortillas only. First Lady Michelle Obummer will get tool-loving Americans to eat only tacos and burritos, food not generally requiring utensils, unless you get one of those wet burritos (burritos mojados) – so they will be banned. (All that cheese on top of a wet burrito is not as good for you as the vegan vegetables from Michelle’s garden so don’t even ask for queso.)

Generalisimo Obama will stop at nothing to appease the Latino base. He had 3 1/2 years to make the tortilla executive order and yet he waited until an election year to unveil this scheme.

It’s all a forkspiracy! Don’t be fooled by the incompetent Obama, he is in fact a multi-tasking, time-traveling space pimp, who wants to take “our motherforking forks off your motherforking plates.”

But once the Feds take our forks, then they hide our spoons. And you can’t have a Tea Party without a spoon! Obama rids the U.S.A. of the Tea Party! Pretty soon Michelle Obama will  not allow us to keep our elbows on the table, or wipe our mouths on our sleeves.

When sporks are outlawed, only dorks will use sporks! Can’t you see it!?!?

Never mind that the Secret Service, not the President, makes all the security calls for events, even forbidding pens at a recent $2,500 fundraiser with Hollywood elites.

Dead Brietbart’s sharp operatives should look into that. Probable headline: