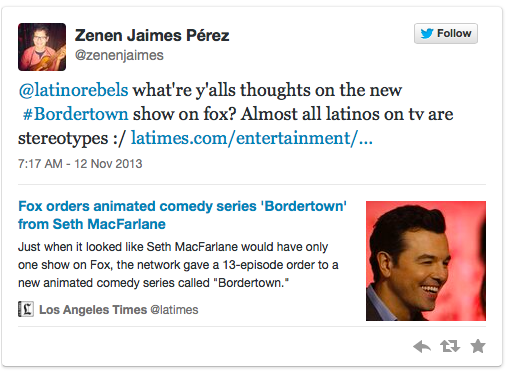 I know, it’s just a cartoon. But if you know me, you know how I feel about cartoons. They are super important! Cartoons have allowed me to tell truths, to pick fights with the privileged, the greedy and the stupid. Satire is often best expressed in cartoon form. Cartoons are powerful. Ask Posada.

There are already a ton of opinions on the Internet about this show. I want to know one thing:

Where did they see any episodes of Bordertown?

We haven’t even written the pinche show yet! We just started Monday. Do these people have a Time Machine? May I borrow it? I’d like to meet Zapata.

Anyhow, I know people hope the show is good, and that the portrayals of Latinos and immigrants aren’t the same old Hollywood crap. So do I. That’s why I signed on.

Also, I hope to have my own cartoon show one day, and this is a pretty good way to help me get closer to that goal. By the way, the writer’s room has FOUR actual Chicanos/Mexican-Americans in it. I’d like to see any network TV show top that.

The creator of Bordertown and I have the same goal: To craft a show full of social and political satire about the changing demographic nature of the USA. If you’ve read any of my work in the past, you know that I am not afraid of rude and non-PC material…as long as it has a point.

I hope Bordertown will be exactly that and I hope you watch it in 2014.

(Or send me a copy of the Time Machine copy of the show from the future, so I can know what to write.)