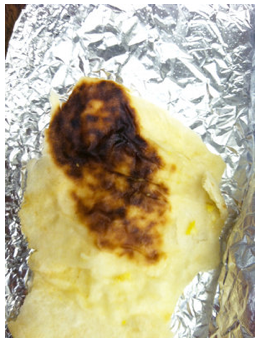 “I’d been eating it and hadn’t seen it,” Garza said. “It made me a little nervous. I was wondering what was going on here.”

Nothing like that had ever happened at the center before, though they do have Bible study and prayer meetings for the clients.

And, while it’s the first occurrence at the center, Jesus has appeared on a tortilla before.

Continued over at the Beeville Bee-Picayune, from whom we borrowed this photo.