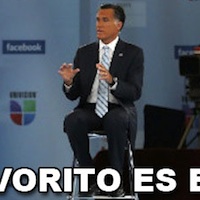 Those vendidos at Univision‘s Espanish subtitling department are lying Cubanos and they hate Mexicans like me. That is the ONLY EXPLANATION I have for the way they translated my remarks for my Espanish-speaking friends.

Here is what I really said:

So-called transcript: But the truth is as you know my dad was born of American parents living in Mexico.

The immigration system, I think we all agree, is broken and it’s been a political football for years. MEXICANOS DEBER EL SELF-DEPORTO

Well, first of all this is a campaign about the 100 percent. GRINGOS FLOJOS NO PAGAR TAXES. ESPECIALMENTE EN TEXAS

I am a businessman. YO SER UN BAINDIDO

Yeah, that’s a great question and it counts, and you point out, Jorge. TU ERES EL LATINO ANDERSON COOPER

I would repeal all of Obamacare and replace it. VICKS VAPORUB PARA TODOS

We have a responsibility in this country to reduce drug usage. YO SER MORMONAZO MORENAZO