Hundreds of broke-ass out-of-town “goldbugs” descended on this Mexico-adjacent county Thursday morning after late-night AM talk radio buzzed with news of an old gold mine and  human remains (see newspaper clipping below) near what is now the 16th (dogleg) hole of the municipal golf course.

Within minutes, five Walmart senior citizen greeters and a hardware department clerk were trying to calm the gold-crazed flashmob. The goldbugs bought every last shovel, pickaxe, GPS unit, sunblock and bag of Doritos at the  Pacific Avenue supercenter.

Is Yuma Eldorado? And if so, WTF?

“Eldorado? It was el horrible, that’s what it was!” said one shaken Walmart cashier. “Some of these guys weighed 300 pounds and they just kept coming. One of them kept screaming, ‘GLENN BECK WAS RIGHT!!!”

Growing fascination with the City of Gold created a weekend spike in interest in the so-called Conquistador Diet as disaffected hipsters searched Google for a one-size-fits-all cure for their weltschmerz, existential angst and ennui.

Lifestyle meme metrics maven Manny Mac Moof blogged that  “a surge in the diet means it might dethrone the trendy Paleodiet — which is so 20,000 years ago really, am I right people? — even though a strict conquistador diet means you have to get really really frackin’ sick with malaria.”

Proponents note it at least it doesn’t leave you smelling like kombucha.

Hollywood, of course, knows how to turn gold into more gold.

Gold-crazed contestants will rampage through the suburbs of Arizona, cutting down small shrubbery with machetes, but mostly just end up stealing other contestants’ silverware.

Hate State Gov. Jan Brewer told reporters at Phoenix’s airport (where she was preparing to snub Nobel Peace Prize winner Shimon Peres) she was pleased with the increased economic activity, although her facial expression betrayed little more than a sun-weathered Botox-sculpted grimace.

“Arizona is a job creator,” she said, “and of course we’ll create jobs even if it means using heavy equipment to erase our state’s Aztlanian history. If we don’t destroy these hateful claims on our past, the next thing you know the little brown ones will want to read about it school. And as my colleague Juan Huppenthal pointed out, if we allow that we’ll end up with Mexican-American lawyers. No way, Jose!” 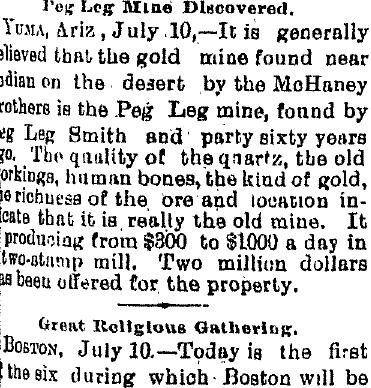 Meanwhile, wannabe presidential candidate and gold standard advocate Rep. Ron Paul (R-TX) altered plans to fly to Arizona, where he is now scheduled to speak Wednesday to students at the University of Arizona’s Mineralogy Department about summer internships in the desert.

Paul had been scheduled to lead seven ribbon-cutting ceremonies at California medical marijuana dispensaries from Berkeley to Boyle Heights. He announced the visit himself:

The people of Arizona need to know I will defend their rights to explore, excavate and, um… yeah. Can I get a sandwich around here?

Aides said Babeu was enroute from San Diego after the BONY2012 “Love in the Streets” press tour and Arpaio was phoning ignorant Latino voters on behalf of presidential hopeful Mitt Romney.

Pochos Elise Roedenbeck and Mack Reed contributed to this estory.