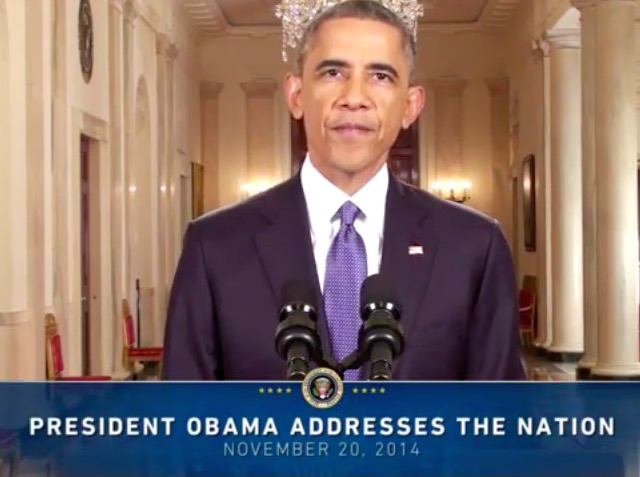 (PNS reporting from HOUSTON) Families here are thanking President Barack Obama as they sit down to their Thanksgiving meals today.

Undocumented immigrant Mario Garza, who plans to pay his fines and “get in the back of the line,” is overjoyed with the White House plans to help fix “our broken immigration system.”

Garza’s son Lionel said that his father had begun searching for a second job in order to pay the fees needed for filing, and that his mother Delia bought extra masa harina to make a few extra dozen tamales in an effort to raise funds.

“I don’t know if that’s going to work so good,” he said. “All the señoras kind of have the same plan, you know, so I think that there’s going to be more tamales out there than people will want to buy, but I guess we can all be thankful for that.”

Jim Williams, the comptroller of the city of Pasadena, Texas, is also thankful for Obama’s action.

According to Williams, the opportunity for regularization of employment status for a significant percentage of Pasadena residents will cause a bump in tax collection over the next fiscal year. “Now that we have people earning decent salaries and out there working, earning and spending, we gonna collect a whole mess a taxes here in the city. It’s like we done struck oil around here for the second time.”

When asked on what projects the city anticipated spending its additional revenue, Williams fired off a list:

The dream of future income is also on the mind of Nidia Ballasteros, a notary public and tax preparer with an office on Spencer Highway.

Ballasteros and her husband have assisted many of their undocumented neighbors with their income tax returns over the years, and have also provided guidance in filing immigration paperwork for a “nominal fee.”

Ballasteros said that despite the bad publicity that “notarios” have received for making serious errors that have resulted in deportation of unwary undocumented consumers, her office “provides an important service to the community. These people don’t know about the laws and procedures of the U.S., they don’t speak English, they are afraid to trust the authorities, and the immigration lawyers want too much money or they tell them that they shouldn’t file for papers,” said Ballasteros.

“We don’t know the meaning of the word ‘can’t’ here,’ she said. “We are going to help you even if everyone else says no, because we care about helping people.”

“Not everyone gets papers when we file for them,” she admitted, “but we are getting better the more experience that we have in helping the community, and we are sponsors of the Fiestas Patrias celebration every year and everyone enjoys that celebration.”

“This year is going to be so busy for us, I already told my husband to set aside some money to pay for some advertising in the Spanish newspaper, and to hire a muchacho to stand on the corner dancing around with an Obama mask and a zarape, to bring in more business.”

“I think we might make enough to put a pool in the backyard, and to buy mi’jo a new truck for his 16th birthday. I thank the Lord for this opportunity, only in America!”

Even in the exclusive River Oaks neighborhood there was reason to give thanks. Republican Senator Ted Cruz, an outspoken critic of President Obama and the proposed immigration action, told aides behind closed doors that he is thankful for the President’s proposal, according to those close to the legislator.

“If the President had continued deporting 400,000 illegals every year, it would be hard to criticize him for being soft on immigration,” Cruz told staff members over breakfast tacos Monday. “This announcement is like Christmas, Chanukah and Boxing Day put together! I’m going to have a field day with this, I’ve got talking points from here to Iowa.”

When an associate asked whether the President’s action would force the Republicans to take legislative action on immigration reform, Cruz laughed and shook his head.

“No way, no how,” he replied. “If we do that what do we stand for as a party? We don’t have anything else to pitch to the American people, other than cutting corporate taxes and deregulating dangerous industries, and that’s not a winner with the average Joe Blow,” said Cruz.

“We’ve pretty much lost the gay marriage thing, Ebola was good while it lasted, abortion will only take you so far….we’ve got the illegals, we’ve got ISIS, and we’ve got scary black men. Obama did me a huge solid with this! Gracias, mang.”

“Maybe this amnesty can help a couple of primos of mine that came over from Cuba a few years back, tu sabes, trying to find freedom from el comunismo in Canada.”