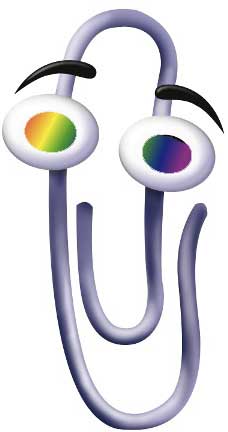 THIS JUST IN: (PNS reporting from REDMOND, WA) Former Microsoft Office Assistant Clippy, fired after a controversial career just trying to help some people out for crissake, will come out as gay in a forthcoming tell-all autobiography, PNS has learned.

This reporter tried to corner the elusive icon for an interview this morning when we spotted him in an area coffeehouse near the Microsoft campus.

“It looks like you’re writing an article,” he said.