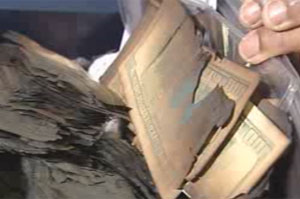 According to the LAPD statement, the sonic boom which broke windows across Russia was likely a self-inflicted gunshot from Dorner, who may have been hiding on the meteor.

Officers rushed to the crash site when an anonymous tipster reported the meteor came from the constellation of “Ursa Major,” which is also the LAPD name for Big Bear. Observant detectives quickly learned that Russia herself was often depicted as a bear, heightening their suspicions.

The LAPD has dispatched investigators to search for Dorner’s wallet at meteor crash sites in San Jose, Cuba, Chile and Japan.  Sales of “Don’t Shoot, Not Dorner” merchandise have escalated in those areas as a result of the announcement.