This is seen as a business-friendly ruling. Following the SCOTUS decision, Arizona’s Sally Beauty Supply announced they will have a sale on all blonde hair color solutions, and a new process called “Untanning.”

Russell Pearce, the author of the Hate State’s immigration law, told Salon he’s “very happy” with the Supreme Court ruling. Pearce hopes to celebrate the Supreme Court ruling with a lavish banquet at a local Phoenix Mexican restaurant, but he is currently banned from all Mexican restaurants in the area. Pearce’s SB 1070 fiesta may be limited to a Burrito Supreme at a Taco Bell in New Mexico.

Despite the ruling, SB1070 is still suspended, and has to go back to lower courts for implementation.

Once it does take effect, the federal government will not automatically accept for deportation every person arrested under SB 1070 in Arizona, federal immigration officials said Monday.

Immigration and Customs Enforcement said it will not take action when receiving calls from local police unless the person arrested meet priorities for deportation. ICE’s priorities include illegal immigrants who have been convicted of serious crimes and those who pose a threat to national security.

Sheriff Joe Arpaio said he is excited to continue enforcing the profiling part of SB1070. “I started a whole new program to trap illegal toddlers and kindergartners, which began last week when I arrested a six-year old girl. The perp was obviously an international terrorist here to take jobs from Dora the Explorer and Handy Manny.” 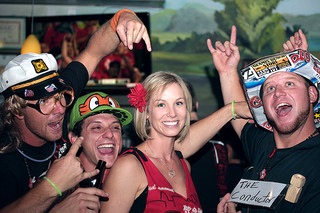 In an unforeseen development, undocumented Irish immigrants now flocking to Arizona. “It’s like a sanctuary state for white illegal aliens,” said bartender Chauncey O’Shea, adding “It’s the Luck O’ The Irish to be born pasty white, and not black and tan (photo, right.)”